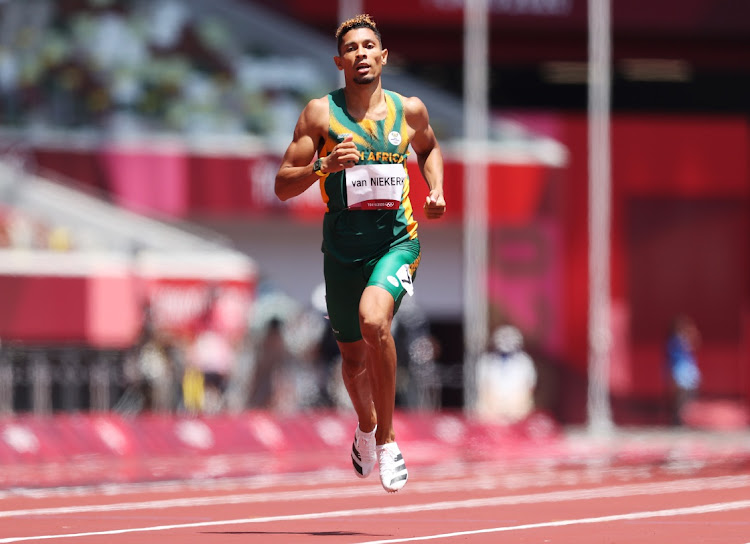 Defending Olympic champion Wayde van Niekerk admitted he felt nerves before he ran a less-than-perfect race in the 400m heats at the Tokyo Games on Sunday.

His display in searing heat did little to answer questions about his race fitness and his ability to produce an extra gear at the death, but he got the job done.

Van Niekerk, the owner of the 43.03sec world record he set at the 2016 Rio Games, finished third in his heat to automatically progress to Monday's semifinals.

The 29-year-old, looking to return to the top of the world after injuring his right knee in late 2017, was sharp over the first half of the race, but his trademark kick and smooth elegance were absent on the home straight.

“I had quite a bit of nerves I had to shake out today,” said Van Niekerk. “I had a good 200m, shut down a bit too soon, but I’m sure the more I do this the more I start getting more control.

“But I’m in the semis and make sure I make up for  lost time now. But I feel positive, I feel good.”

Wayde van Niekerk begins the defence of his Olympic 400m crown at the Tokyo Games on Sunday insisting he is fit enough to slug it out for three full ...
Sport
1 month ago

Van Niekerk didn’t try to dice the two men who finished in front of him, Anthony Jose Zambrano of Colombia, the 2019 world championship silver medallist who took the heat in 44.87, and Australian Steven Solomon, second in 44.94.

Then again, Van Niekerk didn’t have to take them on, although he had to keep an eye on nearby Leungo Scotch of Botswana, fourth in 45.32 to advance as the quickest of the six fastest losers.

“I was aiming for top two but obviously that didn’t happen, but I’m still in the Games and I’m still in the running for a medal and that’s what’s important,” said Van Niekerk, who should have more in the tank, considering he’s been faster in his two previous races this year, clocking 44.56 and 44.87 in June.

And he’ll have to dip into those reserves in the next round.

World champion Steven Gardiner of the Bahamas won his heat in 45.05 and veteran Kirani James of Grenada, the London 2012 champion, clocked 45.09. Randolph Ross of the US, the fastest man in the world this year, failed to qualify.

South African sprint superstar Wayde Van Niekerk and his wife Chesney have announced that they are expecting their first child.
Sport
2 months ago

Van Niekerk’s right knee was surgically reconstructed after hurting it in a game of tag rugby, and Sunday’s race was only his sixth 400m in two years.

He looked good in a few 200m races earlier this season, but in the one-lap race he has yet to deliver his famous gazelle-like glide into the finish.

Father-to-be Van Niekerk said his motivation to do well extended beyond personal reasons.

“It’s definitely been a tough few years, and these last two years for the entire world.

“My country’s  going through so much right now, so much stress, so much disappointment and pain and I just want to try my best to be a shining light at this moment, fighting through my setbacks and injuries and just being somewhat of a positive to the rest of the country.”

While SA’s three 100m sprinters all advanced out of their heats on Saturday, Van Niekerk’s two 400m compatriots failed to progress.