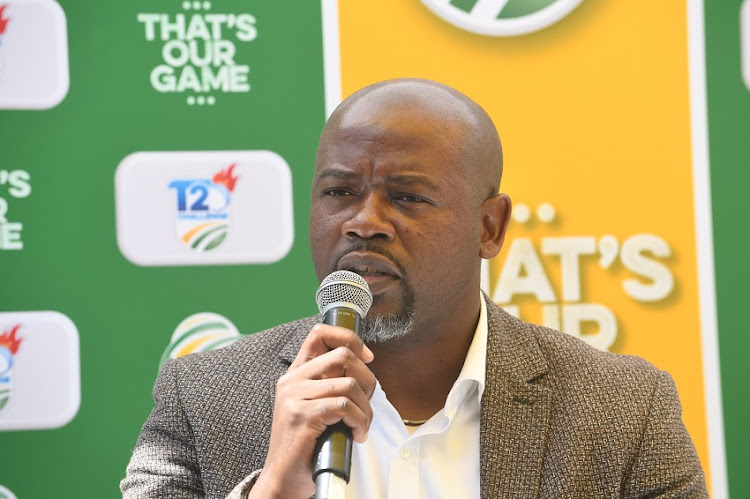 Thabang Moroe has testified that a plan was hatched before the 2019 World Cup to lay the blame squarely on him should the Proteas not do well at the tournament.
Image: Sydney Seshibedi/Gallo Images

Thabang Moroe has detailed how he was allegedly undermined by the Proteas team management‚ including then-captain Faf du Plessis‚ in the months leading up to his suspension as Cricket SA (CSA) CEO three years ago.

The former CSA boss was testifying under oath at the organisation’s social justice and nation-building (SJN) transformation hearings and said a plan was hatched in the weeks leading up to the 2019 World Cup to lay the blame squarely on him should the Proteas not do well at the tournament.

Moroe‚ who was suspended in December 2019 and fired in August last year without appearing before a disciplinary hearing‚ told the inquiry how he was contacted by a Proteas player who told him that he had unintentionally walked into a meeting at a team hotel where he overhead what he told the CEO was a “Plan B” being discussed.

The meeting was apparently attended by the team management‚ including coach Ottis Gibson and Du Plessis‚ and a plan was allegedly discussed to blame the CEO should the Proteas perform badly at the World Cup‚ which was to take place later that year (2019).

Moroe said in early 2019 he got a call from one of the players in the national team. “The first thing he asked me was 'what have you done to these people?'

“I asked what he meant and he said 'the coaching or the management staff as well as the media are after you.'

“The player then told he walked into one of the rooms that was being used by the team management and there was a private meeting happening.

“What was being discussed was the World Cup, and in particular what was in discussion was Plan B‚ which was how to react or what to tell the media and the public should our performances at the World Cup be below par.

“The decision was simple. What this player told me is that he heard one of the guys saying ‘we should blame everything on the CEO, plus our media guys don’t like him anywhere‚ so it will sell’.”

Moroe said he reported the matter to the board‚ who promised to deal with it.

“I thought‚ OK‚ it is fair. Most of the board members were disappointed to say the least to discover such a conversation had happened.

“The decision that the board took immediately was that should the Proteas not perform as expected at the World Cup‚ then everybody would be fired and that the board will talk about this matter in public.

Erstwhile Cricket South Africa (CSA) CEO Thabang Moroe has confirmed he has made a submission and will testify at the organisation’s transformation ...
Sport
11 months ago

“I thought that was good enough. Obviously if you have a team that is going to the World Cup and is not confident in how they are going to perform‚ and they are already planning to get away with murder‚ if I can put it that way, in representing the country at the World Cup‚ that was concerning to me‚ knowing that I was essentially the one who was earmarked as the scapegoat.”

Asked by evidence leaders how the Plan B was to implicate him‚ Moroe gave further details.

“It is important to tie that up. We had two meetings with the team management‚ the captain‚ as the board‚ to ask them about their preparations for the World Cup and how they felt.

“In both meetings they were positive and pretty happy. They spoke about the support that I had given to them and how happy they were in terms of supporting them and anything else that they needed to make sure that they were ready for the World Cup.

“But we had one of the worst World Cup tournaments that the team has ever had.”

Moroe said he and the board was disappointed in the team management reports after the World Cup‚ but they were not surprised.

“The reports from the head coach‚ captain‚ the report of convener of selectors Linda Zondi at the time‚ these reports changed the tune of the two previous meetings that we had before the World Cup.

“These reports spoke about how I had not given the team the support they needed before they went to the World Cup and how I took certain unilateral decisions that affected the team and [it was] because of these decisions that they could not perform optimally.

“You now have all reports from team management pointing fingers at the CEO. What they did not know is we had discussed at board level to say something like this was coming.

“The board now realises that what I had actually given to them as feedback from the player meeting was the truth because we met with these people about two months or so ago and everything was perfect according to them.

“It is in that meeting that the board told me that they would like me to fire everybody‚ team management and they needed a change of captain. All sorts of excuses were given in terms of why the matters were not raised then.”

Moroe said the board promised that they would come out publicly to talk about “Plan B”.

CSA invited people accused of racism and other adverse allegations to reply to testimony levelled against them.