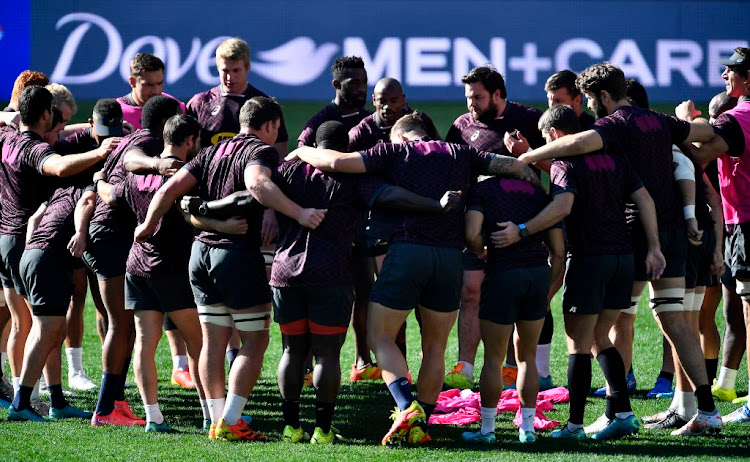 The Springbok team during captain's run at Cape Town Stadium. Team selection for the deciding Test against the British & Irish Lions is in the spotlight.
Image: GALO IMAGES/ ASHLEY VLOTMAN

The most unique British & Irish Lions series will conclude on Saturday with the result‚ perhaps fittingly‚ as nail-bitingly in the balance as a Covid-19 test.

Like their predecessors in 2009, the world champion Springboks have the opportunity to add a Lions’ scalp‚ and given their lack of preparation, victory will cement their place among the great teams who have simultaneously worn the Green and Gold.

The selection leapfrogging that has seen Cobus Reinach and Morne Steyn advance their position at the expense of Herschel and Elton Jantjies proved ...
Sport
10 months ago

For the Boks‚ who bar one Test had been inactive since they won the Rugby World Cup in 2019‚ Saturday’s clash is also an opportunity to take a firmer grip on their place at the top of World Rugby’s rankings.

The tourists, too, will go into the decider with a slice of history very much in their crosshairs.

Coach Warren Gatland could complete a trifecta of consecutive unbeaten Lions’ series to Australia‚ New Zealand and SA‚ which will rank most favourably in the pantheon of coaching overachievement.

With so little time to prepare they had to lean heavily on what worked for them during the World Cup. The cohesion and coherence in team structure‚ with a fair smack of physicality, helped make up ground lost in the first Test with their show of force in the second.

As the ballast of the Bok scrum‚ the responsibility that rests on Frans Malherbe's shoulders is perhaps weightier than most.
Sport
10 months ago

While the Lions have sought ways to improve by perhaps mixing things up this weekend‚ the Springboks will play to a familiar script. For them it is “more of the same”‚ which pretty much characterised the way they went about their business in Japan.

Invoking the spirit that helped carry them to that title has been paramount in this series.

“It is similar but also different to a World Cup because for some of us we won’t get this opportunity again‚” captain Siya Kolisi noted on the eve of the deciding Test.

“We want to make sure that’s the mentality throughout the team. We are in a unique position. This is our final‚” he said.

The Boks couldn’t go “more of the same” in selection and will miss cogs that proved so vital in their march to World Cup glory. Scrumhalf dynamo Faf de Klerk and behemoth flank Pieter-Steph du Toit have yielded to injury and will play no part.

“They will be two big losses for them. They are both world-class players and can have a big impact on the match. They definitely will be a loss‚” observed Lions coach Warren Gatland.

In the first Test and the first quarter of the second‚ the Lions more than matched the Boks in the arm wrestle. The Boks’ physicality then took its toll, particularly once the Bomb Squad was deployed after the break. There is no Bomb Squad this week but Franco Mostert provides reassuring bulk on the side of the scrum.

The possibility of a deflating draw has come into sharper focus this week as the Springboks and the British & Irish Lions prepare for series glory in ...
Sport
10 months ago

The Lions will also seek improvement in the set piece and the introduction of the fit-again loosehead prop Wyn Jones they hope offers redress.

“The set piece and keeping down the penalty count that went against us last week‚” he added.

While the Boks with their python-like method will seek to suffocate the Lions‚ the tourists are less agoraphobic and will be desperate to explore the wide open spaces.

“We have to maintain the tempo of game‚” said the captain.

“If we can do that we can stay away from anything that might slow us down.”

Last week they lost the collisions‚ the hard yards and the referee’s undivided attention. The Lions have a lot to recapture‚ but win or lose‚ their relevance doesn’t rank among it.

Springboks utility back Lionel Mapoe is expecting a brutal and nail-biting contest against the British and Irish Lions when the two sides face off in ...
Sport
10 months ago