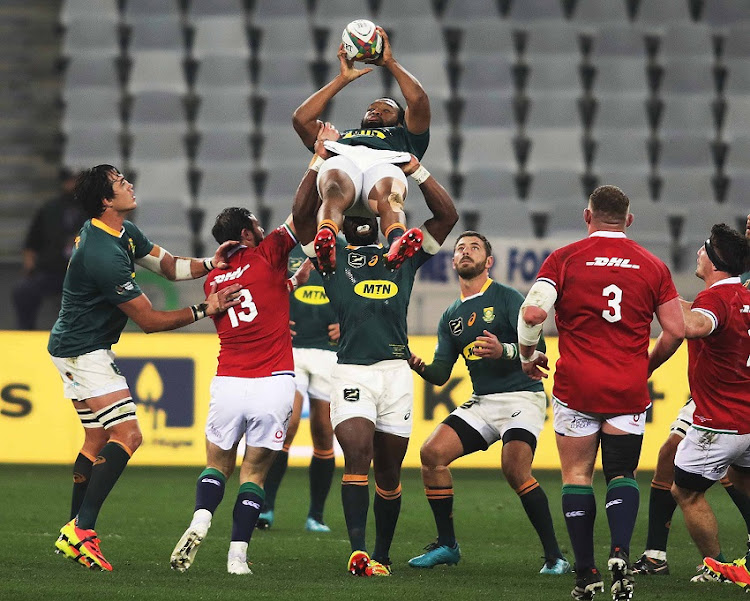 Cloaked in fog initially, this city revealed its splendour in time for the much-anticipated Mother of all Battles.

It then returned as series clarity appeared to be beyond the Springboks and the British & Irish Lions until Morne Steyn, just as he did in 2009, split the uprights to send Bok fans back to nirvana in their 19-16 third Test win at Cape Town Stadium that clinched the series 2-1.

Steyn and Cheslin Kolbe were key contributors in the second half, which was fitting given the strong hand they played in the Boks' finest triumphs in recent history.

The most unique British & Irish Lions series will conclude on Saturday with the result‚ perhaps fittingly‚ as nail-bitingly in the balance as a ...
Sport
10 months ago

For all the talk about the 'Boring Boks' it again took a moment of potential match-winning majesty to give them a crucial advantage on the scoreboard. Again it was the dynamo Kolbe, who lit the Yokohama sky two years ago, who inflicted a telling body blow.

The try will be deemed contentious, but almost all tries now venture into areas of grey.

Bodies battered, bruised, bloodied, abound after the final whistle but after a brutal series it was the Boks who were unbowed.

The possibility of a deflating draw has come into sharper focus this week as the Springboks and the British & Irish Lions prepare for series glory in ...
Sport
10 months ago

It was a nerve-jangling second half as the Boks clawed their way back into the contest only to see those gains disappear.

Earlier, too, they were up against it.

The problem for the home team was that it was soon apparent that the momentum they were widely tipped to have in their possession from the second Test had evaporated too.

It was a first half in which the Boks were required to absorb an inordinate amount of pressure as the Lions rediscovered the spring in their step from the first Test.

They put down a marker in the first half by taking possession of the ball for extended periods and setting up camp, often deep in Bok territory.

They played with energy and intensity but they would have been disappointed they only held a four-point lead by the time the halftime whistle sounded.

As the ballast of the Bok scrum‚ the responsibility that rests on Frans Malherbe's shoulders is perhaps weightier than most.
Sport
10 months ago

By then they held 67% of the possession and had been in the Bok half 58% of the time.

They succeeded to stunt the Boks in key areas.

The Lions' maul defence was impeccable and they rarely gave an inch.

On a surface that had all the structural integrity of filo pastry the scrum battle was one that had an element of lottery to it. The Lions had a tighter grip initially but the Boks won two crucial penalties from that facet in the first half, one that directly translated into points.

There was no clear dominance that gave the Boks the traction from which to impose their power game.

The Lions lost their principal goal-kicker, Dan Biggar, perhaps ironically just as Handré Pollard was lining up his first attempt at goal.

The greatest time-wasting rugby Test of them all

If Warren Gatland gets to making a video of the Rassie sort, it will be of nothing more than a clock ticking, as it did in the first half of 63 ...
News
10 months ago

In his replacement Finn Russell the Lions had a supremely gifted playmaker, but for him to be at his most potent the tourists had to drift from their original plan. If they had intended to open things up by introducing Russell in the second half, they required the Scot to do a holding job as early as the 12th minute.

He soon made his mark when he restored parity on the scoreboard with a penalty and there were a few incredulous gasps when he eschewed a kickable penalty by opting for touch. Those gasps subsided, however, when the Lions deployed their maul, in an area that yielded profit in the first Test.

Only this time it was new hooker Ken Owens who crashed to the ground at the back of human caterpillar.

Russell converted and the momentum was firmly with the men in red. They continued to make inroads up front, but they played with width too and potentially squandered a first half try-scoring opportunity when an offload instead of the embrace of a defender was the preferable option.

If that was a let-off then the Boks played their get-out-of-jail card when the Lions fluffed their lines in setting up another driving maul in the same spot Owens had earlier touched down. They changed lanes and were called up by referee Mathieu Raynal.

For a player whose preparation for the series had been reduced to a drip due to Covid-19 protocols, Siya Kolisi proved to be both Captain Courageous ...
Sport
10 months ago

That passage of belligerence potentially helped win them the game.

The Boks had to dig deep in the second half to keep the Lions at bay.

This feisty, tetchy, at times even laced with spite and bite series looked destined for a draw.

As the final whistle drew nearer this denouement seemed inevitable.