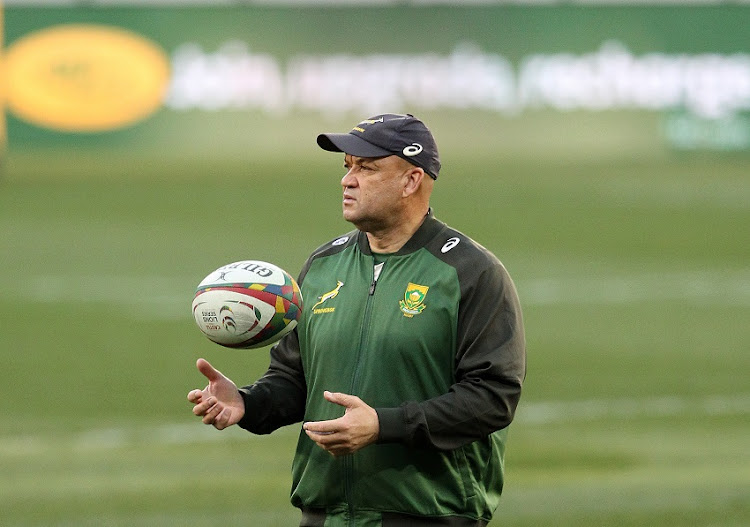 Nyakane showed his flexibility as he started the series against the Lions at tighthead but was moved to the bench in the remaining two matches where he was used as loosehead cover for the injured Ox Nche.

He gave storming performances from the bench in the highly contested scrums and made life extremely difficult for Lions scrummager Kyle Sinckler.

“Trevor Nyakane for me is a champion‚ a champion in the sense that whatever task is given to him‚ he always does it with the right attitude and he always gives 100%‚” said Davids as the Springboks started preparations for the first Rugby Championship match against Argentina at the Nelson Mandela Stadium in Gqeberha on Saturday.

“It has shown in his performances at tighthead as well as at loosehead‚ and having a player with those assets in the team broadens the team’s base in terms of depth and gives us many more options.

“We are very happy with what he has achieved and the same goes for other players around him like Ox Nche and Steven Kitshoff‚ which gives us exciting prospects going forward.”

Nche‚ who was part of the Boks starting front-row combination in the first Test against the British & Irish Lions‚ suffered a neck injury that kept him out of the rest of the series.

“Ox Nche at this stage is training and will definitely be considered for this upcoming game against Argentina. As for lock RG Snayman‚ he was always part of our plans going forward but medically he is busy with his rehabilitation.

"I think he will definitely be considered as soon as there is a lot of improvement from his side to be part of the squad for the next few Test matches‚” said Davids.

Davids is happy with the depth in his squad as the current forwards held their own without retired Tendai “Beast” Mtawarira and Francois Louw‚ and the injured Duane Vermeulen and Snayman.

The Springboks just completed a come-from-behind 2-1 series win over the British & Irish Lions‚  and here are six of their most outstanding ...
Sport
1 year ago

“I am very proud of the performance of the players. It was a very tough series against the British & Irish Lions and very competitive up front. The group grew from the first Test against Georgia and went into the series against the Lions where we tried to improve ourselves.

“Having so much experience in the side helped us because the players share their experience with the younger [counterparts] and those who are new to the team. We are coming from a very competitive series where a lot of guys performed well when they got opportunities‚ and we are looking forward to the two matches against Argentina.”