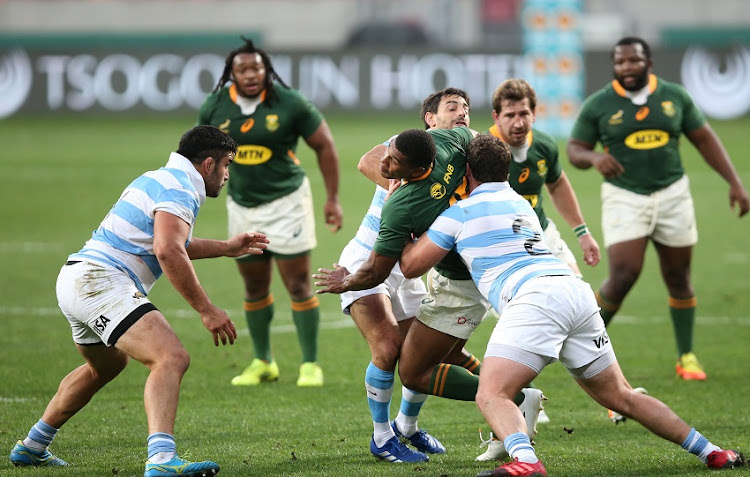 Whatever your views are on their playing style, the one thing that is unanimous about this Springboks side is that the scoreboard fully agrees with them after they beat Argentina 32-12 at Nelson Mandela Bay Stadium on Saturday.

For the third week on the spin, coach Jacques Nienaber’s men have mastered as many important Test wins as they got their Rugby Championship campaign off to a wining start against this stubborn Argentina in Gqeberha.

Before this hard fought victory, the Springboks beat the British and Irish Lions on successive weekends to win that series 2-1 in Cape Town but they were heavily criticised in some quarters for playing ‘boring rugby’.

This changed team did not hit the higher gears but they effectively did the business against this unpredictable Los Pumas to register this victory where they denied their visitors from scoring a try.

Credit must also go to some senior players like captain Siya Kolisi, Eben Etzebeth, and Lood De Jager who provided the leadership as the Boks went into this match with 10 chances in the starting line-up.

It was with these words that SuperSport commentator Kaunda Ntjuna introduced Siya Kolisi to the rugby world in his first game as Springbok captain ...
News
9 months ago

Though they were a few moments of ill-discipline and poor decision making, the Boks ended the first half in control of proceedings having scored two tries by Cobus Reinach and Fassi.

They were not only impressive when going forward but they also managed to restrict Argentina to only three penalties which were put away by their talismanic flyhalf Nicolas Sanchez.

This victory is commendable for the Boks given that Nienaber made wholesale changes due to injuries and resting some of the players who featured in the series win over the British and Irish Lions.

The Boks did not look like they started the match with a fresh backline front row made up of Ox Nché, Wilco Louw and debutant Joseph Dweba who replaced Steven Kitshoff, Frans Malherbe and Bongi Mbonambi.

In the backline, Elton Jantjies replaced Handré Pollard for a halfback pairing with Cobus Reinach while Frans Steyn and Jesse Kriel replaced Damian de Allende and Lukhanyo Am in the midfield.

In the backline Damian Willemse got a rare start in the place of Willie le Roux at fullback, while Nkosi and Fassi started at wing in place of Cheslin Kolbe and Makazole Mapimpi.

It remains to be seen Nienaber and his think tank will recall some of the regular starters who were rested against Argentina when they meet again in the second Test match on Saturday at the same venue.

Jantjies gave Springboks the lead in the opening minutes with a penalty from about 30m and the Boks increased the lead a few minutes later through the first try of the match by Reinach.

Los Pumas replied with a penalty of their own by Sanchez but South Africa responded shortly with the second try that was finished by exciting Fassi and another penalty that was put away by Jantjies.

In the last five minutes of first half, Argentina reduced the deficit to 12 points with Sanchez’s second penalty but Jantjies, who ended the match with 17 points to his name, kept the scoreboard ticking.

In the second half, Los Pumas managed only three points as they struggled to impose themselves and South Africa finished with a flourish when another debutant Jaden Hendrikse scored the third try in the dying minutes.