Nienaber impressed by fringe players in Boks' win against Argentina 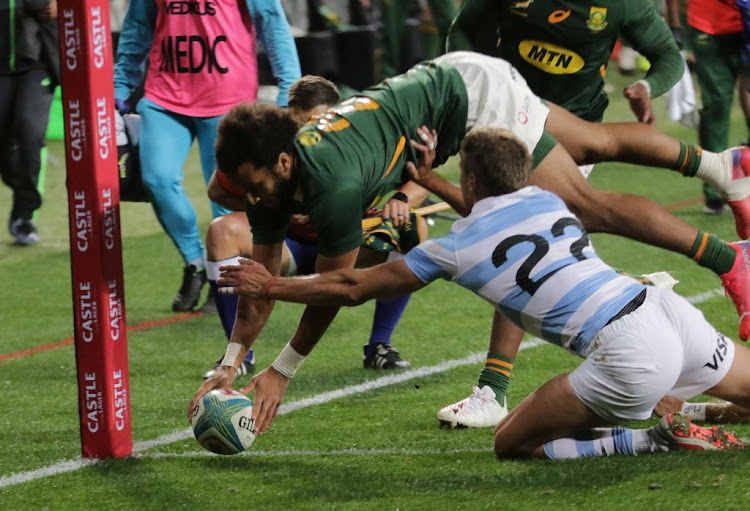 Jaden Hendrikse scores a try for the Springboks against Argentina in the Rugby Championship clash in Gqeberha on August 14 2021.
Image: Richard Huggard/Gallo Images

Springbok coach Jacques Nienaber was highly impressed by the performance of some of the fringe players in the 32-12 Rugby Championship bonus-point win over Argentina at the Nelson Mandela Bay Stadium on Saturday.

Nienaber was happy that several players who were given rare starts in the starting line-up raised their hands with eye catching performances in Gqeberha. Several regular starters were missing due to injuries and the Bok coach's desire to manage the workload.

“When we had a defence session on Wednesday, you could see that those who played on Saturday [against the Lions] were still sore, and there were guys who haven’t played in a while.

“A guy like Wilco Louw last played in the Premiership final in England, Joseph Dweba last played five or six weeks ago in France, and Ox Nche last played three weeks ago in the first Test of the Lions Series, but you could see that they were nice and fresh.

“I thought we got a lot of energy out of them. The big issue is always to get cohesion, but I must say that the players nailed down the details and used all the information we sent to them. It was excellent.”

It was also good to see players like Aphelele Fassi, Elton Jantjies, debutant Dweba and Nché, Sibusiso Nkosi, Damian Willemse and Marvin Orie use their opportunities to great effect.

There was also a key moment in the closing stages where another debutant, Jaden Hendrikse, scored the third try to ensure that SA finished the match with a flourish.

The Boks' starting XV showed 10 changes to the team that won the series against the British and Irish Lions 2-1 last weekend. They still overcame a Los Pumas team that is highly rated by Nienaber.

“The work the players put in was awesome,” said Nienaber.

“We had a couple of beers on Saturday after the series win [against the Lions], but we knew that we were going straight into the Rugby Championship. On Monday when I started the first session I could see the guys were really clued up and ready to go.

“We knew that playing five Tests in a row was a big ask and we made a couple of changes, but you could see the freshness of the players who had come in, after not playing for a few weeks some of them.

“We had a defence session on Wednesday and you could see that some of the guys who played on Saturday were a bit iffy, but the new guys were climbing into the session and were raring to go.”