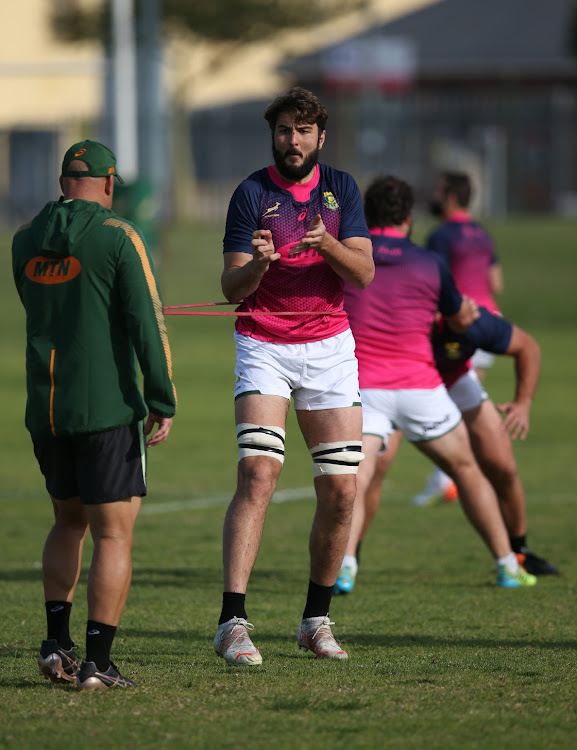 Hot on the heels of Handré Pollard, Steven Kitshoff and Damian de Allende reaching the Springboks' 50-cap club, this Saturday it's Lood de Jager's turn when the team squares up to Argentina in Gqeberha.

Another member of the squad joining the elite group is obviously good news for coach Jacques Nienaber, who played a significant part in the developmental of the current crop of Springboks.

“I started working with Lood only in 2016 when I rejoined the Boks for a short stint before we went to Munster. I can take my hat off to him given all the ups and downs he had.

“My experience with him isn't a lot, he got injured. The shoulder injury then that unfortunate leg injury and was out for a long time.”

De Jager has certainly had to deal with the vicissitudes of being a Bok and operating in the rough and tumble of rugby's engine room.

The bumps in the road weren't limited to orthopaedic upheaval.

He was in the team when they lost to Japan at the 2015 RWC, Argentina and Italy the following year and came off the bench in the 57-0 rout the Boks suffered at the hands of the All Blacks in 2017.

Those pains have eased but it is the physical toll he has had to pay of late.

Shoulder dislocation in the World Cup final saw him depart the scene with pain etched on his face.

He had barely recovered when a broken fibula and knee ligament damage in a training ground accident cast fresh doubt over his participation in the series against the British and Irish Lions.

He got back in time for the second Test but with no actual game time under the belt.

“Lood is slowly getting back to his match fitness. He's now played about 200 minutes, that's two and a half-full games. I'm very happy for him,” said Nienaber.

Try-scoring machine back for Boks

Springbok try scoring machine Makazole Mapimpi will be gunning to improve his stunning strike rate of 15 tries in 17 Test outings when he faces ...
Sport
9 months ago

De Jager, who juts 2.05m out of his socks, conceded it takes a while for a player with his elongated frame to get up to Test speed.

“For me, who is not a naturally fit guy, it is quite hard,” he chuckled. “You just have to try your best in training, but nothing comes close to game intensity and what you need to do in a game situation.

“But I think it was similar for all of us in that we didn’t have the preparations we would have liked to have before the Lions series, but that’s life.

“Then I also got Covid-19 just when I was back from injury, and again that was something I needed to accept as part of the journey. It is tough to get match fitness, though, when you don’t have a proper preseason or a long rehabilitation period when you can get up to fitness and simulate match situations in training.”

De Jager will lengthen his stride in the coming games and the Boks will be thankful he again is part of their journey.