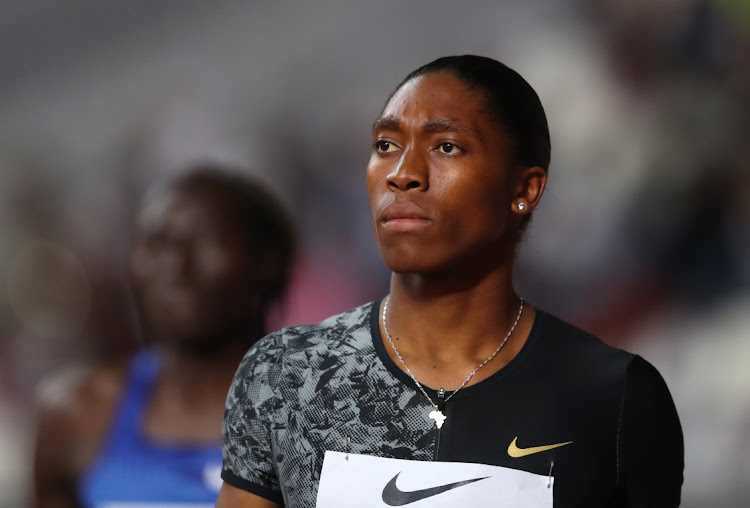 Caster Semenya looks on before competing in the women's 800m during the IAAF Diamond League event at the Khalifa International Stadium in 2019 in Doha.
Image: GETTY IMAGES

The lawyers of former Olympic and world 800m champion Caster Semenya are preparing for another showdown with World Athletics in a bid to have the controversial testosterone regulations scrapped.

According to a story that was published by Telegraph Sport, the British Journal of Sports Medicine, which published the original evidence on the regulations four years ago, has now released a “correction” to that 2017 paper.

The correction to the 2017 paper has led campaigners to argue that the rules, which prevent athletes with differences of sexual development (DSD) from competing at distances between 400m and the mile, unless they take hormone-reducing drugs, be ditched immediately.

Semenya, who refused to take hormone-reducing drugs, did not defend her double Olympic 800m title in Tokyo, but there is a strong possibility of making a return after World Athletics’ scientists admitted some of their findings were “on a lower level of evidence”.

Hubbard has been eligible to compete at the Olympics since 2015, when the International Olympic Committee (IOC) issued guidelines allowing any ...
Sport
1 year ago

Semenya unsuccessfully challenged the regulations at the Court of Arbitration for Sport (Cas) and Switzerland’s supreme court and is now awaiting a hearing at the European Court of Human Rights.

“This is very significant new information,” Semenya’s lawyer Gregory Nott, of Norton Rose Fulbright, told Telegraph Sport on the emergence of new evidence. He questioned why World Athletics waited until after the Olympic Games to release the report.

“We are in the midst of the European Court of Human Rights case and will be discussing with our London QC and the whole legal team how to introduce the information into the proceedings.

“World Athletics have recently given notice of their wish to intervene in the European Court of Human Rights proceedings and we would hope that they will now support setting aside the regulations.

“It is more than surprising that World Athletics did not reveal this evidence before the recent Tokyo Olympics and allow Caster to defend her 800m title.”

Talking about potential links between high levels of testosterone and improved performance in women, Stephane Bermon, director of World Athletics’ health and science department, and his predecessor Pierre-Yves Garnier, wrote: “To be explicit, there is no confirmatory evidence for causality in the observed relationships reported. We acknowledge that our 2017 study was exploratory.

“With this in mind, we recognise that statements in the paper could have been misleading by implying a causal inference.

“This statement should be amended to: ‘High fT levels in female athletes were associated with higher athletic performance over those with low fT in 400m, 400m hurdles, 800m, hammer throw, and pole vault.”