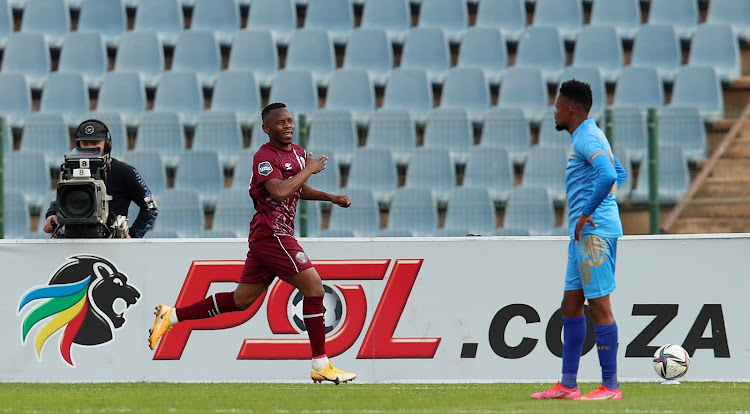 Swallows attacker Mbulelo Strydom Wambi came off the bench to score the winning goal against Royal AM in a DStv Premiership encounter at Dobsonville Stadium in Soweto on August 22 2021.
Image: Muzi Ntombela/BackpagePix

The much talked about Royal AM are finally living their Premiership dream, but the Pietermaritzburg-based club’s top-flight debut ended in heartbreaking fashion against Swallows on Sunday afternoon.

The last-gasp 1-0 win at Dobsonville Stadium in Soweto potentially ushered the steeped rich history and heritage of Bloemfontein Celtic into the wilderness as Royal took up the famed club’s Premiership place.

After holding their own until a lapse of concentration in added time cost them against a Swallows team that lost just five matches to finish sixth last season, substitute Mbulelo Wambi’s last-minute diving header was like a spear to the hearts of the Royal players, who gave a good account of themselves in their maiden Premiership match.

The Premeirship new boys will consider themselves unlucky not to have got anything out of this encounter but would have learnt a lesson that it's not over until the final whistle at this level.

How smaller clubs can escape the brutal cycle that killed Celtic

The club’s sale comes just one season after Bidvest Wits were sold, so where did they go wrong?
Sport
9 months ago

The Royal defence went into sleep mode at a crucial stage of the match as they allowed another substitute, Keletso Makgalwa, ample time and space to deliver a pinpoint cross into the box that found Wambi’s diving header for the only goal of the match.

Celtic’s top-flight status was bought last week by KwaZulu-Natal-based businesswoman and reality TV star Shauwn Mkhize, who relocated the club to Pietermaritzburg and renamed it Royal AM.

Royal, who inherited almost the entire Celtic playing personnel and technical team led by John Maduka and captain Ndumiso Mabena, started their first match as DStv Premiership campaigners with the core of players who as recently as last week called Bloemfontein home, before they were abruptly forced to pack their bags and travel to their new dwelling in Pietermaritzburg.

The likes of Lantshane Phalane, Given Mashikinya, Lucky Baloyi, Thato Lingwati, Menzi Masuku and Mabena, showed why they were regulars for Celtic last season as they denied Swallows before a lapse in concentration became their undoing.

They anchored Royal as the newcomers looked to have successfully negotiated their first Premiership point.

Call in the PSL clowns to explain why they messed up

Royal were not expected to do much given the cumbersome build-up to this match, but gave a good account of themselves.

The match also saw the return to the big time of Mozambican veteran Elias Pelembe for the Premiership new boys, along with Kabelo Mahlasela, a player who established himself as a marauding winger for Celtic.

The two teams dished up a dull first half performance with clear-cut goalscoring opportunities few and farin  between.

The second half also failed to produce something to write home about until Wambi’s strike.

Swallows flying striker Ruzaigh Gamaldien missed a couple of glorious chances to score his third goal in two matches after his double dumped Soweto rivals Orlando Pirates out of the MTN8 last week.

Royal came agonisingly close to winning automatic promotion to the Premiership last season, falling just short of winning the GladAfrica Championship, after the three points they were docked and awarded to Sekhukhune United secured a top flight spot for the Limpopo club.

Bafana Bafana coach Hugo Broos kept to his promise of an emphasis on youth, naming a 31-man preliminary squad for the team’s first two 2022 World Cup ...
Sport
9 months ago

Royal cried injustice and still believe that they are the rightful winners of the GladAfrica Championship and took the league to court.

Royal then boycotted the promotion-relegation playoffs as part of a protest in which they hoped to overturn Sekhukhune’s promotion.

They were found guilty of all charges and their sentencing verdit is imminent.

Swallows have two days to recuperate before their trip to Durban to face off against AmaZulu on Wednesday while Royal will be at home to Cape Town City at Chartsworth Stadium.

Both matches will kickoff at 5pm.

The sale of the Premier Division status of Bloemfontein Celtic to Royal AM has been approved, according to a letter sent by the Premier Soccer League ...
Sport
9 months ago