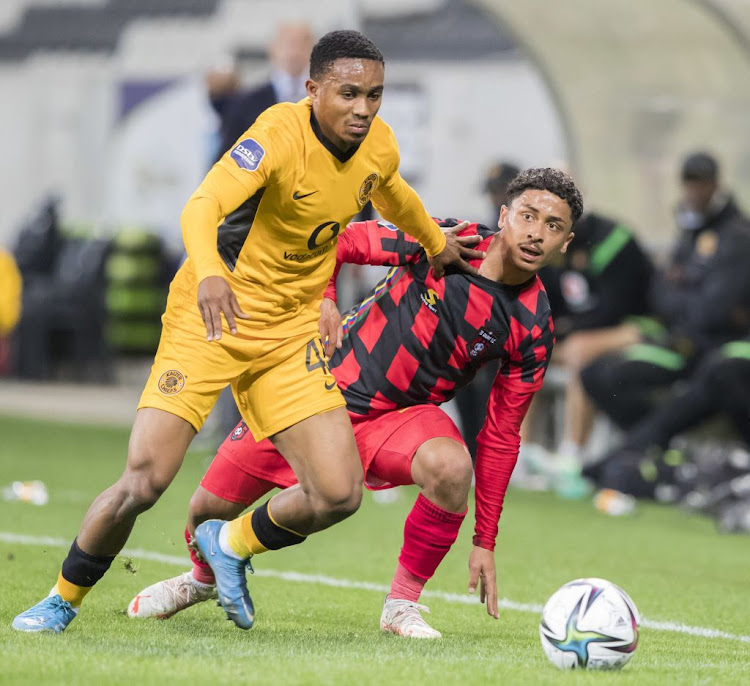 Njabulo Blom of Kaizer Chiefs and Ethan Brooks of TS Galaxy during the DStv Premiership match between the two sides at Mbombela Stadium on August 22 2021.
Image: Dirk Kotze/Gallo Images/BackpagePix

TS Galaxy coach Owen da Gama looked back at his side's league encounter against Kaizer Chiefs with a great deal of satisfaction and was pleased that his charges managed to keep the visitors at bay at Mbombela Stadium on Sunday evening.

The two sides played to a goalless draw in a game that left Chiefs coach Stuart Baxter frustrated.

Da Gama said he was happy that they managed to restrict Chiefs and prevent them from getting into their stride.

“I think [we restricted them], especially their aerial prowess, their set-pieces, the crosses from left and from right. Sifiso Hlanti on the right and [Njabulo] Blom coming on the right, those were quite evident,” he said.

“[Bernard] Parker dropping to the midfield and just overloading things a bit to get things going, with [Khama] Billiat spinning off him in attack.

“So from a tactical point of view, the technical team did very well. We restricted the crosses, we forced them to play more on the right. I think it worked to a certain point, I was just disappointed with our strikers.”

Kaizer Chiefs opened their league account with a goalless draw at TS Galaxy at Mbombela Stadium in Nelspruit on Sunday evening.
Sport
8 months ago

There was a dearth of clear-cup opportunities during the at-times pedestrian encounter and the best chance in the first half fell to striker Samir Nurković, but his glancing header from inside the area was brilliantly saved by Galaxy goalkeeper Vasilije Kolak, who tipped the ball to safety in the 24th minute.

Billiat spurned the best chance of the second when the Zimbabwean ballooned the ball into the stands when he had Kolak at his mercy.

Galaxy asked questions of their own, but Da Gama was disappointed that his strikers did not trouble Chiefs goalkeeper Bruce Bvuma and his rearguard.

“I think we lost unnecessary balls that went forward. It is obviously a concern and we will work harder on that. But with regards to the rest of the approach, I think the guys got it absolutely spot on,” he said.

“Obviously we are disappointed with the draw, at home we like to win. But, they got a little bit of mileage, they have played two competitive games already [Chiefs lost to Mamelodi Sundowns 2-1 on penalties in the quarterfinals of the MTN8  over a week ago] and this was our first. So we had to be a little bit cautious and just get over this first.”