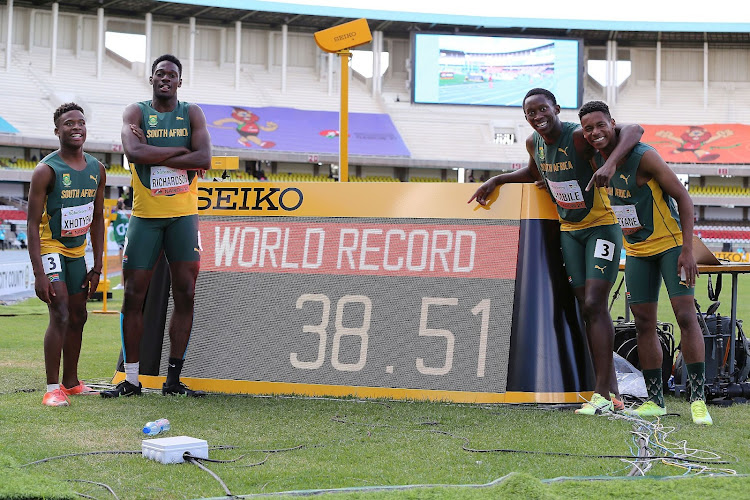 The national junior men's 4x100m relay team closed out a superb campaign by the South African squad at the World Athletics U20 Championships on Sunday, breaking the world junior record to win gold on the fifth and final day of competition in Nairobi, Kenya.

The SA quartet of Mihlali Xhotyeni, Sinesipho Dambile (of Dimbaza), Letlhogonolo Moleyane and Benjamin Richardson, secured victory in the final in 38.51* seconds, shattering the previous global U20 mark of 38.62 which had been set by the USA at the Pan American Championships in Costa Rica in July 2019.

They also obliterated the African record of 39.33 which SA had equalled in the heats the day before. Jamaica took second place in the final in 38.61. Poland took the last spot on the podium in 38.90.

“Individually we are all fast and together we got a world record,” said Richardson, who earned the 100m silver medal earlier in the week. “It shows SA is improving in the relays and the individual events, which is great.”

As long as we accept poor leadership, SA will drop the baton

Instead of settling for mediocrity, we need to maintain that tension between where we are and where we want to be
News
2 months ago

The SA women's 4x100m relay team finished sixth in the final, with Marione Fourie, Charlize Eilerd, Kayla La Grange and Viwe Jinqi clocking 45.05* to break the national U20 record of 45.07 which had been set by the Northern Transvaal (Gauteng North) provincial team in Tshwane in March 1984.

Long jumper Karmen Fouche was sixth in the final with a best leap of 6.32m. Maja Askag of Sweden landed at 6.60m to bag the gold medal.

SA men miss out on a 4x400m relay final spot

The men’s 4x400m relay team ran a season’s best in their heat at the Tokyo Olympics on Friday‚ but that was not enough to qualify for Saturday’s ...
Sport
2 months ago

SA took sixth position at the medals table with a total of nine medals (three golds, two silver and four bronze).  Host nation Kenya, finished at the top of the standings with 16 medals made of eight golds, one silver and seven bronze.

“We are over the moon with the whole performance of the team,” said James Moloi, the President of Athletics SA. “Coming from the background of a tough and disrupted preparation programmes and competitions, we are beyond words to describe this achievement.

“The sheer determination of this team is reflected in the number of athletes that reached semifinals and the final. This has been a team effort, where those who didn’t go through the next stage in their events, continued to support their teammates throughout the competition. That is patriotism in the true spirit of sportsmanship.” — Athletics SA