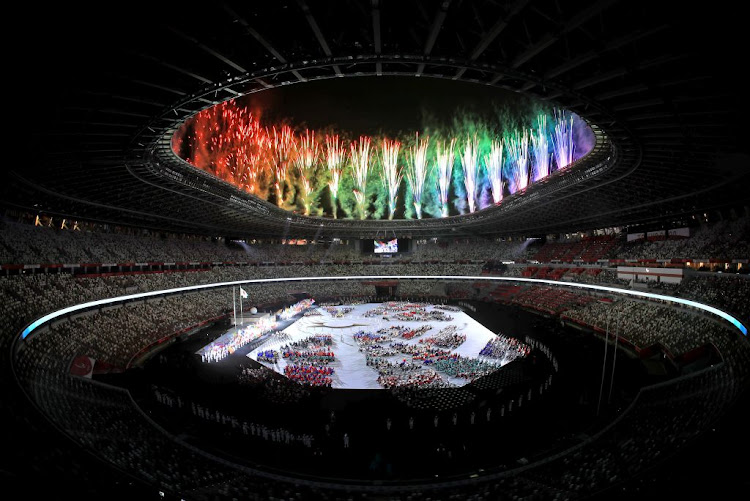 Fire works go off during the opening ceremony of the Tokyo 2020 Paralympic Games at the Olympic Stadium on August 24, 2021 in Tokyo, Japan.
Image: Alex Pantling/Getty Images

As he walked about the Olympic Stadium during the Tokyo 2020 Paralympics opening ceremony held under a full moon on Tuesday night, Hendrik van der Merwe would have been forgiven had he stopped, looked about and taken a moment for himself.

It has taken him 17 years of trying for the man they call “Legs” to get to the Paralympics, a journey of highs and lows that has tested him, and forced him into retirement from competitive swimming after he did not make the 2016 Games. He needed to make a living, he said, and he went into coaching. But he wanted one more shot at the sport he had taken up at school in 2004.

Van der Merwe, who was born with spina bifida and cannot use his legs, will take part in the 100m breaststroke heats on Saturday morning, an event in which his long-time rival Tadhg Slattery has two gold medals, two silvers and a bronze from his six Paralympics. Slattery is in Tokyo as a personal coach, having retired after the London Games. He made his debut in Barcelona in 1992, where he won gold.

Paralympics set to open in Tokyo amid worsening COVID-19 crisis

The 2020 Paralympic Games will kick off in Tokyo with the opening ceremony on Tuesday as Japan struggles with its worst COVID-19 outbreak so far, ...
Sport
8 months ago

Slattery retired as a Paralympic athlete a few times, and joked this week that Van der Merwe had asked him to stay on for one more chance to race against him. “We have been rivals for long time, until I retired,” said Slattery. “He was trying to beat me. He asked me to stay for one more race. I said to him, ‘No thank you’.

For Van der Merwe “it feels like a weight has been lifted off my shoulders”. Van der Merwe, who is a strength and fitness coach, was in 2017 shortlisted in the top 10 for the Men’s Health magazine cover model. “Trying to make the Paralympic team has been a 17-year journey of highs and lows, but both the highs and the lows were essential in developing me into the athlete physically and mentally that I am today.”

He is one of a small swimming team of just four. Retirements and time have seen some of SA’s biggest stars retire and the code, once regarded as a trove of medals thanks to the likes of Natalie du Toit and Kevin Paul, is looking to Van der Merwe, Christian Sadie, Alani Ferreira and Kat Swanepoel to add to the pile.

Slattery has hinted that Sadie is the one to watch in the five events he has entered: 50m butterfly, 100m breaststroke, 200m individual medley, 100m backstroke and 50m freestyle. Born with radial dysplasia, which is also called “radial club hand”, the bones in his arms are underdeveloped. He did to want to be a Paralympian when he was younger, he confesses.

“I always did Para sports from a young age. There’s a different mentality, everyone would get a medal. I didn’t enjoy that because I’m very competitive. You get taught to be disabled in a way. I didn’t see myself as disabled. A lot of people think you need help and you don’t really need help. And that sort of put me off Para sports.”

Ferreira will be the first South African in the water, on Wednesday in the 100m butterfly heats, before she returns on Friday for the 400m freestyle.

Van der Merwe will have to wait a few more days before he makes his Paralympic debut. On Tuesday, he watched an opening ceremony that celebrated disability and hoped, again, to provide a basis for enhancing the lives and awareness of the differently abled. It is a very different Games in a very different time. Outside the stadium, protesters called for the cancelling of the Paralympics and the New Zealand team did not parade due to Covid-19 worries. There is reason to fear and be uncertain.

Van der Merwe has gone through fear and uncertainty. He waited 17 years for this. He won’t mind waiting a few more days.