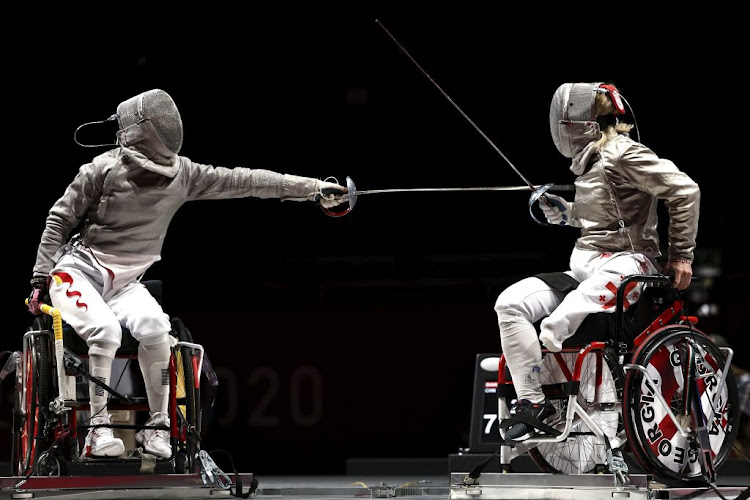 Rong Xiao of Team China, left, competes against Irma Khetsuriani of Team Georgia during the Women's Sabre Individual Category B placement 3-4 match on day one of the Tokyo 2020 Paralympic Games at on August 25 2021.
Image: Buda Mendes/Getty Images

After the pomp, emotion and music that filled the empty stadium for the opening ceremony of the Tokyo 2020 Paralympics had died away, an accomplished musician got Team SA’s campaign under way in a manner that was more sotto voce than big band bash on Wednesday.

Alani Ferreira from Pietermaritzburg was 12 when she began to have problems and noticed delays in her tennis shots, and had issues sight reading when playing the piano. She was diagnosed with Stargardts Macular Dystrophy, a genetic disorder that took her central vision and left her with peripheral vision.

Her sights have been set on a medal at these Games after her debut in Rio de Janeiro in 2016, and while her start in Tokyo was a mirror image of Rio as she again finished sixth in her heat in the S13 100m butterfly and did not make it through to the next round, she admitted that it was a swim she needed to settle her nerves.

“I must say it was quite exciting. The first race you’ve always got a bit of jelly legs but I really enjoyed it. It was meant to be that ‘get into the Games’ race. My main one is still coming up so I’m really excited and I’m happy with my start,” she said afterwards.

“The Paralympics thus far has definitely been different. Not being able to say hello to your friends in a conventional way, but I think Japan and IPC (International Paralympic Committee) have handled it really well.”

As he walked around the Olympic stadium during the Tokyo 2020 Paralympics opening ceremony held under a full moon on Tuesday night, Hendrik van der ...
Sport
9 months ago

Her time of 1:20.25 was four seconds quicker than Rio, where she competed while still in matric, and she believes the race will stand her in good stead when it comes to her favoured event, the 400m freestyle, with the heats scheduled for Friday.

Table tennis player Theo Cogill, who was partially paralysed when he was stabbed several times while trying to break up a fight in Cape Town, lost his first qualification game to Krisztian Gardos of Austria, going down 11-5, 11-9, 11-7.

Before the stabbing 10 years ago, Cogill had hoped to make the SA table tennis team for the London 2012 Olympics. Now the man from crime-stricken Bonteheuwel is SA’s sole table tennis player at the Paralympics.

“When I wake up and go outside people are doing drugs, even two doors away. I go to the shops and can see someone lying on the ground, dead. It’s just the norm in the area. There’s no escaping the realities,” Cogill told the Team SA website.

“It’s very hectic. I believe that you should surround yourself with people who are positive about life. Whether it’s sport or education, you have to go in that [forward] direction. There’s so much poverty in Bonteheuwel and the reality is that crime is happening all the time right in front of you. It’s difficult being strong and finding positives. It’s much easier standing on street corners and falling into the hands of gangsters who will pay you to do the work for them.

“There have been many ups and downs after my accident. The recovery took so long, the first year I was in a wheelchair. Then I got a slight feeling in my legs back, but it was a struggle from there. Finally, getting back to playing wasn’t easy. It took a long time for me to come to terms with the fact that my body wouldn’t be what it used to be. I was a top table tennis player and I played good football. I was the top goalscorer for three years at Maitland FC.

“Now I can’t move so fast and the body doesn’t do what I want it to do. I still struggle with aches and pains and niggles, but I have to stay positive. We’re not on programmes like the sport’s professionals are, we don’t have physios, so we have to help ourselves. In a way, though, I suppose I am a community leader, so there’s a lot of people looking up to me as a positive role model.”

Cogill was scheduled to play his second qualification match early on Thursday SA time, while equestrian stars Phillipa Johnson and Cayla van der Walt will begin their competition in the dressage event.