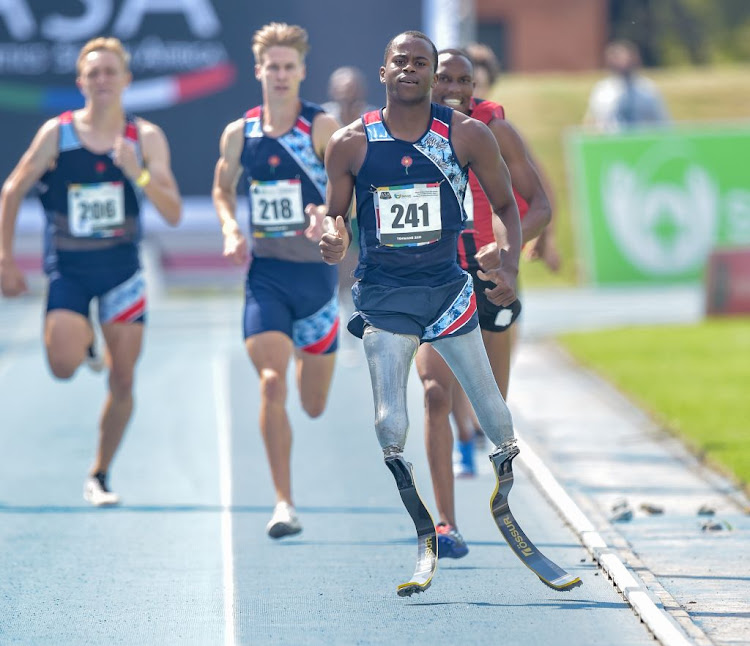 At the 2016 Paralympics in Rio, Ntando Mahlangu, then just 14, bounced with giddy excitement on the podium on the two prosthetic legs that had not only won silver in the 200m, but told the story of those who had helped him get there.

The names of all those who had played a part in him reaching the Games, just four years after he had learnt to walk after his decision to amputate his underdeveloped legs, were inscribed on the legs. Five years later, Mahlangu is planning something similar for both the 200m and long jump events.

“Coming into these Games I have done something special,” Mahlangu said from Tokyo on Thursday. “I have done something similar (to Rio) for my long jump blades and my 200m blades. There will be two different designs. I don’t want to spoil the surprise, but it is very special. I will share the story of the design after each event.”

Mahlangu is still a teenager but feels his emotional growth has matched his physical development. He is a Paralympic superstar, one of nine Paralympians to be featured in the Netflix documentary Rising Phoenix.

After the pomp, emotion and music that filled the empty stadium for the opening ceremony of the Tokyo 2020 Paralympics had died away, an accomplished ...
Sport
11 months ago

“As a person I started to believe in myself a lot more. I’m also emotionally and mentally a lot stronger. The speed and the physicality are very important, but what I have gone through has made me a better person than I was in 2016. I’ve worked on my strength and running style, but the first thing we had to do was to make sure I was emotionally right for the Games. Having that, I feel a lot more confident going into the competition.

Mahlangu will compete in the long jump on Saturday and the 200m on September 3, where he will come up against Richard Whitehead, the dominant force in the 200m and the winner in Rio and London. The Brit is back at the age of 45 and while he says he is definitely going to retire after these Games, “I’m not sure he will,” laughed Mahlangu.

“I have run against him many times. He dominated in 2016, then at the 2017 World Champs and in 2019, at the World Champs, the tables were turned and I won. If you look at his social media he is training and getting stronger, which is a good thing. We know what has been going on with him. I don’t share a lot on social media. I do the work and then I surprise people in competition. I’m going for the gold.”

As he walked around the Olympic stadium during the Tokyo 2020 Paralympics opening ceremony held under a full moon on Tuesday night, Hendrik van der ...
Sport
11 months ago

On Thursday, dressage rider Philippa Johnson-Dwyer celebrated returning for her fifth Paralympics having overcome extraordinary odds during a testing 2020. She was seventh in the grading and qualified for the final individual test final, but just getting here for the two-time Paralympic gold medal and silver medal winner has taken some doing.

“About 10 months ago I was diagnosed with endocarditis (a life-threatening inflammation of the inner lining of the chambers and valves) and had to have open heart surgery. While they were doing the tests for the endocarditis they found I had cancer. After the surgery I had to do five weeks of radiation and chemo, but that took me out of riding for seven months,” said Johnson-Dwyer.

“I underestimated what chemo does to your body but I have had the most exquisite team of people around me and they have all done everything in their power to get me here. It made me look at priorities in life, the joy of being able just to walk my horse and not even ride it. It rekindled my passion all over again.”

The 46-year-old confirmed she will be back for Paris, for her sixth Games, and possibly Los Angeles after that, where, no doubt, she will be joined by fellow dressage rider Cayla van der Walt, the US-based South African, who admitted to some nerves on “the biggest stage I have been on” in what was a strong performance in her first Games.

Theo Cogill put up a fierce fight in going down to Brazil’s Carlos Carbinatti 11-8, 14-12, 11-5 in the second match of the table tennis qualification on Thursday.