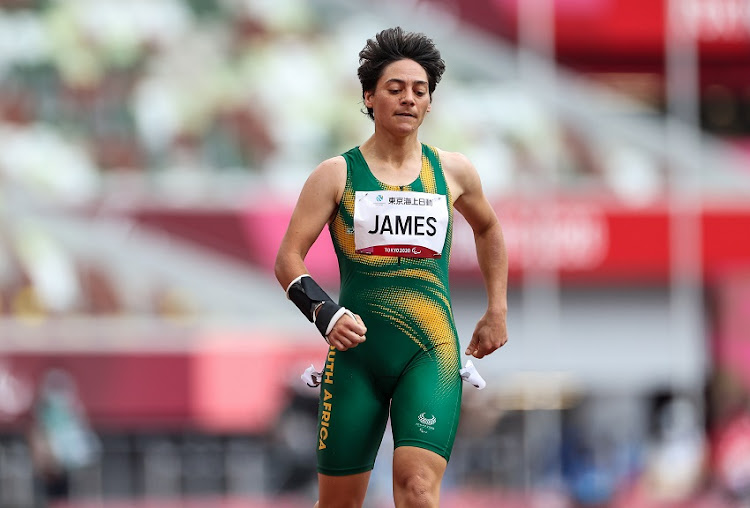 Sheryl James of South Africa in the heats of the women’s 200m T37 during the morning session of Athletics event during day 3 of the Tokyo 2020 Paralympic Games at the Olympic Stadium on August 27, 2021 in Tokyo, Japan.
Image: Roger Sedres/Gallo Images

Day three came and went without a medal for SA in sweltering temperatures at the Tokyo Paralympics‚ but records were broken‚ personal bests bested‚ finals made and the podium step was just a heartbeat away for a farmer woman.

At 35‚ Sheryl James took up competitive sprinting relatively late in life‚ starting just three years ago. On Friday‚ she came within a little over two tenths of a second of winning bronze in the 200m for the cerebral palsied‚ having broken the African record twice in one day‚ a feat she later admitted may have taken a little out of her.

Her heat time of 27.73 secs was followed by 27.57 in a final dominated by the Chinese runner Xiaoyan Wen‚ who set a new world record of 26.58 in her victory.

“I could feel the earlier race in my body a little more than I would have wanted to‚” said James‚ who lists her occupations as “athlete” and “farmer”.

“I tired at the end a little bit so I couldn’t push as much as I’d have liked to. I felt the third-placed athlete (France’s Mandy Francois-Elie) coming back to me a bit in the straight and I thought‚ ‘there’s my chance!’‚ and then I also tired and that was the end of it.”

At the 2016 Paralympics in Rio, Ntando Mahlangu, then just 14, bounced with giddy excitement on the podium on the two prosthetic legs that had not ...
Sport
9 months ago

James’s nickname is Takalani‚ “to be happy”,  and despite finishing eighth in the 100m which he won in Rio‚ her teammate Charl du Toit‚ fresh from his stint as the team’s flag carrier‚ still managed to sport his characteristic smile after the race.

“I have to admit that I’m disappointed at how it went‚” said Du Toit‚ who came home in 11.63 behind winner American Nick Mayhugh‚ whose time of 10.95 broke the world record he had set earlier in the day.

“The body feels good after a bout of Covid-19 a month ago‚ so there are no excuses. But I expected more from myself timewise. I executed both races today similarly‚ which was disappointing in itself‚ because I expected a faster final from myself‚ not necessarily enough to be in the medals‚ but faster than what I did.

“It’s always a massive privilege to wear the green and gold on the biggest stage. As a young kid that’s all I wanted to — represent SA. It’s a privilege to be here and a massive honour to be able to run the race with God. He has tested me quite a lot recently.

“It’s not the result I wanted‚ but it is what it is and we move forward from here. There’s still the 400m (on Tuesday‚ where he is the defending Paralympic champion) to look forward to and I’ll be back.”

After the pomp, emotion and music that filled the empty stadium for the opening ceremony of the Tokyo 2020 Paralympics had died away, an accomplished ...
Sport
9 months ago

Jonathan Ntutu’s third place and season’s best was not enough to earn him a place in 100m final‚ Reinhardt Hamman took sixth in the javelin with a season best 52.49m‚ while Liezel Gouws was disqualified after stepping out of her lane in the 200m heats.

In the pool‚ men’s Christian Sadie set two African records in the day and took a strong sixth place in the 200m individual medley final‚ while Alani Ferreira finished 7th in her 400m freestyle heat with an African record that was not enough for her to make the final.

Wheelchair tennis had a good start to the Paralympics‚ with Evans Maripa cruising to a straight sets win‚ as did Wimbledon finalist Kgothatso Montjane and her partner‚ Mariske Venter‚ in the doubles.

Medals are predicted for Saturday‚ and the amputee athletes are expected to earn them. World champion and record holder Anrune Weyers strolled the last 80 metres of her 400m heat to take second for Saturday’s final. Twice a silver medallist in the event in London and then Rio‚ a win would be fitting in her third and final Games.

As world record-holder with a jump of 6.47m‚ the 19-year-old Ntando Mahlangu is a bang-on favourite to win the long jump‚ which will be held in the second session of the meet on Saturday.

SA long jumpers seem to hunt in packs these days and Mahlangu will be joined in the 10-man field by Michael Mabote. The 100m sprinter Dyan Buis‚ who competes with cerebral palsy‚ is a four-time Paralympic medallist‚ and will be hoping to emulate the silver he won in the 100m in London.