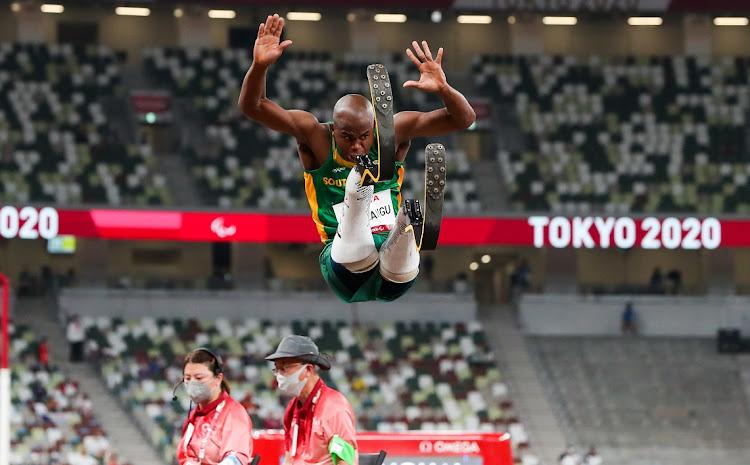 Ntando Mahlangu of South Africa wins the men's long jump T63 final during the evening session of athletics on Day 4 of the Tokyo2020 Paralympic Games at the Olympic Stadium in Tokyo, Japan on August 28, 2021.
Image: Roger Sedres/Gallo Images

With tears, grins and a no-heel heel kick, amputees Ntando Mahlangu and Anrune Weyers celebrated winning SA’s first gold medals with a depth of emotion, grace and dignity that told everything about what they have fought to get here and the legacy they will leave.

For Mahlangu, who spent the first 10 of his 19 years on this planet in a wheelchair, it was not only about setting a world record and winning the long jump on his last attempt, but having the awareness and class to encourage Denmark’s Daniel Wagner, who had led the competition for so long, on his final jump.

For Weyers, it was not only about winning the 400m for arm amputees by a country mile in her third and final Games, but about overcoming Covid-19 that left her struggling to breathe and, yet, having the wherewithal to ensure she congratulated each and every one of the athletes she had competed against.

At the 2016 Paralympics in Rio, Ntando Mahlangu, then just 14, bounced with giddy excitement on the podium on the two prosthetic legs that had not ...
Sport
4 months ago

For both, it was about the comradeship of the Paralympics, about a journey for the disabled that has so many more hurdles but, also, so many more helpers.

“I have to start at the beginning. This is not my medal. There has been so much work put into it,” said Mahlangu, who set a new world record of 7.17m with his final jump to win gold.

He had competed in a combined class of single and double-leg amputees, and when he realised he had won, the teenager who smiled in his pre-jump routine, broke down in tears. He fist-bumped the officials, he hugged his rivals, he did a prosthetic heel-kick in front of the timing board with the new world record board for the photographers.

“A 7.17m jump, going from bronze back to a gold medal ... it is such a big thing for me. This is a difficult class, it’s a combined class. I’m honoured to be a gold medallist. We only took the decision six weeks ago (to compete) and I only started training six weeks back.

“I’d like to dedicate this to the people of Japan for having us here. I stopped doing long jump a long time ago, but coming back and competing against the best.”

Day three came and went without a medal for South Africa in sweltering temperatures at the Tokyo Paralympics‚ but records were broken‚ personal bests ...
Sport
4 months ago

As Weyers spoke to the media after her medal ceremony, the national anthem began playing for Mahlangu’s ceremony in the Tokyo Olympic Stadium. She stopped, and with the tears she had shed on winning her race still fresh on her cheeks, she grinned.

Weyers said she had followed Mahlangu’s story since the beginning, from when he first got his prosthetic legs.

“Seeing him mature and being such a humble athlete is really special. This can be a bit of hope for SA, that no matter what our colour is, no matter where we come from, no matter what we do, we are all humans and we can be better,” Weyers said.

“May the future of SA look better in terms of equality and how we see ourselves as human beings. I celebrate him like a brother, no matter what the outcome is. To support and hold each other, because we all worked to get here, that is what it is about.

“This medal means so much to me, not just for the race itself, but for me being here and beating Covid. I had Covid just a few months ago and it was difficult for me to picture being at the Games. I was very overwhelmed afterwards.”

The other South Africans had a mixed bag of results on day four of the Games. Mahlangu has a young man to mentor in 16-year-old countryman Michael Mabote, who jumped a personal best of 5.18m to finish in ninth in the long jump behind him.

Paralympian’s 17 years of highs and lows

Hendrik van der Merwe, having qualified for the Games at his fourth try, feels like a weight has been lifted off his shoulders
Sport
4 months ago

Swimmers Kat Swanepoel and Hendrik van der Merwe did not make the final of their events despite setting personal bests. Swanepoel was quicker than she has ever been in the 150m individual medley (SM4), taking nine seconds off her qualification time, but finishing fourth in her heat and 11th overall meant she missed out on the final.

Van der Merwe had tried for 17 years to make the Paralympics and before Tokyo had almost given up on his dream.

A physical fitness coach nicknamed “Coach Legs”, for obvious reasons, he has an upper body that is ripped enough to have put in contention to be on the cover of Men’s Health. He did not die wondering in his 100m breaststroke heat, finishing fifth and ninth overall, just outside qualification.

Kgothatso Montjane, the Wimbledon wheelchair tennis finalist and sixth seed here, was back after Friday’s doubles win to beat Saki Takamuro of Japan (6-2, 6-1) in her first-round match.

Leon Els had to return to the court just hours after winning his first-round game and went down hours later to Gordon Reid of Great Britain (6-2, 6-0). Mariska Venter, who partners Montjane in the doubles, was beaten by Japan’s Momoko Ohtani (6-1, 6-2).

Dyan Buis would have hoped for more in his third Games in the 100m for athletes with co-ordination impairments, but, the silver medallist from London, was fifth in his morning heat and did not qualify for the final. Archer Philip Coates-Palgrave made it through to the final round of 16, but lost out on a place in the top eight.