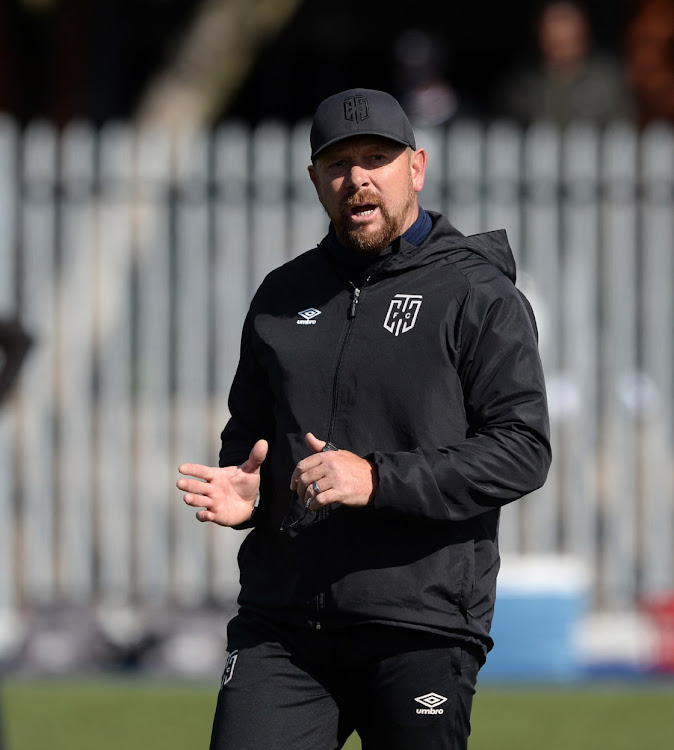 Cape Town City and Swallows played to an exciting goalless draw in their first leg MTN8 semifinal in Athlone on Sunday but anyone who watched the match will be forgiven for thinking the two coaches watched different games.

City coach Eric Tinkler said his side were dominant for large portions of the 90 minutes and should have run out as comfortable winners while his Swallows counterpart Brandon Truter reckoned that though his visiting team had it tough, they had the upper hand and created far better goalscoring chances.

“Today I thought it was a very dominant performance by us. We knew that Swallows were going to be a very difficult team in terms of how they play, the formation that they utilise and playing with the full backs and going inside,” Tinker said after the match.

Eric Tinkler will feel that his team holds the advantage after Cape Town City denied Swallows a crucial away goal in the first leg of the second MTN8 ...
Sport
8 months ago

“We changed our formations slightly to try to catch them. We tried to be a little bit brave in terms of the players that we played in this game, very offensive, and I thought we created so many chances.

“We have hit everything barring the back of the net. We hit the post and the goalkeeper had to make a few saves and some clearances from nearly off the line from their players.

“It was just that final third we did not get the goal but I thought it was a dominant performance from us and the only real time that they caused any real threat was really on a counter.

“The only way they could hurt us was with their keeper Virgil Vries going long and direct looking for Keletso Makgalwa and they could have stolen it at the death with the one chance they got in the second half.

“But I thought really today the players have adapted to the new system very well and I am happy with that.

“Obviously I am happy that we got a clean sheet but we should have won this game comfortably to be honest,” said Tinkler.

Eric Tinkler advanced to the semi-finals of the MTN8 on Sunday at the expense of much more fancied AmaZulu, but the Cape Town City coach soon found ...
Sport
9 months ago

The statistics from the match show that City were dominant and had more opportunities. Tinkler's side had 25 shots at goal, four of which were on target, while Swallows only managed 11 attempts at goal with two of those on target.

But Swallows coach Brandon Truter saw the encounter differently, though he later somewhat contradicted his earlier remarks when he admitted to City mostly bossing the game.

“It was a very tough game for us. I think the first half was end to end and both teams looked very good and had chances as well, but based on the chances created, I think we had the upper hand or created a bit more clear cut chances than them,” said Truter.

“But I think in the second half we came out and created the first chance to score, I think it was a three on one situation with Dillon Solomons and Ruzaigh Gamaldien involved there.

Truter, who led Swallows to a Premiership record with 20 draws last season, was happy with how his team kept City at bay away from home.

“We also saw another good side to ourselves. Today I think we had a good safety defence. I think after 65 to 70 minutes around that time, from thereon it was all City.

“I think our legs were gone with the travelling back from AmaZulu midweek game and then to Cape Town took its toll on the players.”

Truter said Swallows will take the scoreless draw ahead of the second leg in Soweto on September 29.

“It is a goalless draw that we are taking to Dobsonville where we always fancy ourselves.”