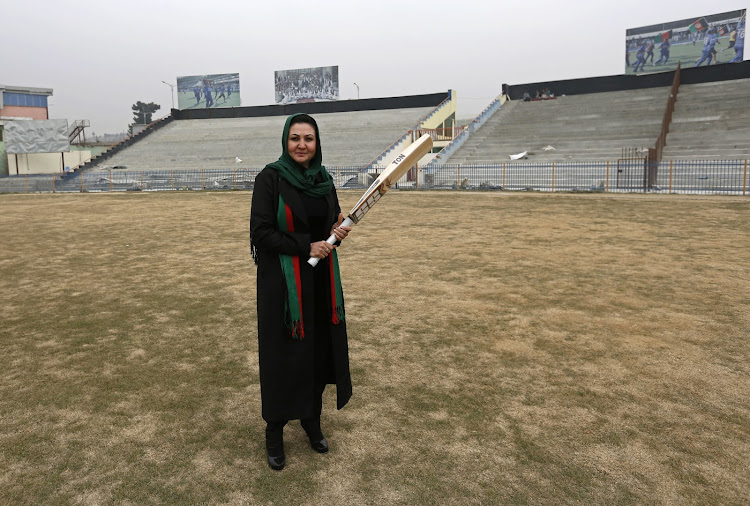 A file photo of the founder of the national women's team, Afghan Diana Barakzai, posing for a picture at the Kabul Cricket Stadium in December 2014. The story of Afghan cricket is a rare bright spot in the troubled country's recent past, full of unlikely successes and glory that have helped unify a divided nation.
Image: REUTERS/ MOHAMMAD ISMAIL

Afghanistan Cricket Board (ACB) chiefs are still awaiting instructions from the country's new Taliban government on the future of the women's game and are not anticipating a decision any time soon, a top cricket official told Reuters.

The Taliban named a new government on Tuesday, three weeks after sweeping to power when the Western-backed government collapsed in the wake of the withdrawal of US-led foreign forces.

When the Taliban last ruled Afghanistan two decades ago, girls were not allowed to attend school and women were banned from work and education.

Afghanistan Cricket Board board gets new chairman post-Taliban takeover

Azizullah Fazli has been re-named chairman of the Afghanistan Cricket Board (ACB) in the first major development in the game's national governing ...
Sport
1 month ago

"So far, we don't have any news from the government," Afghanistan Cricket Board (ACB) chief executive Hamid Shinwari said in a telephone interview.

"Its future will be decided by the new government.

"We are still in an emergency state in the country. Whenever we get to a normal state, that decision will be made."

The Afghan women's squad was quietly disbanded amid safety concerns a few years after it was formed in 2010 but the ACB revived the team last year and gave contracts to 25 players.

The ACB's popular programme for girls has already been paused, Shinwari said, but men's cricket has been allowed to continue as before.

"So far, whatever message we've received is of support for the game," he added.

"(For the) past two weeks, I've been trying convey our mission to the authorities and government officials -- how this game can contribute -- and that has paid off.

"We haven't experienced any impediments so far."

Council of scholars will decide if girls can go to school, Taliban says

Western leaders have said they will judge the new Afghanistan rulers by their actions, including how they treat girls and women
News
1 month ago

Cricket's popularity has soared in Afghanistan and players like spinner Rashid Khan have become marquee names in Twenty20 leagues across the cricketing world.

The men's team will compete in the Twenty20 Cricket World Cup, scheduled in the United Arab Emirates (UAE) and Oman in October and November, before touring Australia for a one-off test.

The ACB is also looking to stage a T20 tri-series, involving Australia and West Indies, prior to the World Cup.

"They (Australia and West Indies) want it in the UAE to help their World Cup preparations.

"But the UAE is also hosting the Indian Premier League. We're trying to finalise the venue," Shinwari said.

His protestations are fair enough, but he will always be remembered as the president who betrayed Afghans
News
1 month ago

The ACB wants to hold its pre-World Cup training camp either in the UAE or in Qatar, so that head coach Lance Klusener and bowling coach Shaun Tait can join the squad.

The team have played their 'home' games primarily in India and UAE in recent years, but if the Taliban recognise the game's potential, Shinwari is hopeful they will be able to host international matches in Afghanistan.

"We are thankful to those countries but at times, we face challenges in hosting them outside," he added.

"We want to invite international teams to play in Afghanistan which will significantly boost our economy.

"We have very good stadiums in three regions -- Kandahar, Nangarhar and Kabul.

"Alu Khel (near Kabul) could be the first to host international cricket in the country."