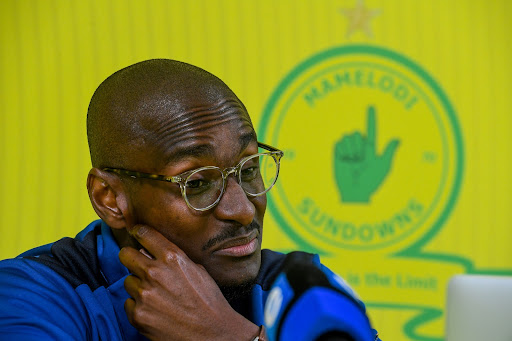 It goes without saying that a team such as Mamelodi Sundowns that dissects opposition with a biologist’s precision will have noticed Kaizer Chiefs' gradual stages of improvement at the start of the 2021-22 season.

Downs co-coach Rulani Mokwena confirmed as much for posterity’s sake ahead of a second tantalising matchup of the new campaign against Amakhosi in the DStv Premiership at Loftus Versfeld on Sunday.

Having had a physical presence in new-look Amakhosi's early evolution under Stuart Baxter in a penalties MTN8 win last month, Sundowns also have close-up intelligence on where Chiefs are aiming.

Coaches know what they say in a pre-match press conference can potentially psychologically affect their opposition's intensity and approach to a game.

Mokwena seemed to have this in mind, but also be conscious of factually acknowledging an imminent danger, pointing to long-ailing Chiefs' tentative progress.

Mamelodi Sundowns co-coach Rulani Mokwena has admitted to "an element of truth" to a disagreement between the club's coaching trio that was the ...
Sport
9 months ago

After some flat performances, Chiefs found some fire in the belly and fluency in a delicious first half of their last game, the 2-1 win against Baroka FC at FNB Stadium that preceded the Fifa international break.

Mokwena suggested that, having taken penalties to eliminate an Amakhosi decidedly still finding their balance in their season-opening MTN8 quarterfinal, but who still managed to fight back from 2-0 down at the break to 2-2, the Brazilians might be in for even more of a fight on Sunday.

“It's a difficult game. The two teams come in on the back of two interesting scenarios, and of course both are trying to improve the performances,” the Sundowns' co-coach said, acknowledging, too, that four-time successive league champions Downs also have a few gears to find.

“I don't think either of us is happy with where we are. But I think early in the season we are content and we know where we are going.

“But we've also watched Chiefs extensively and there's a lot of work that has been done and there are big improvements in relation to how they play.

“Coach Stuart and his technical team have done a good job putting an imprint on the team. And you go into the analysis and the data to see that.

“Before the coach arrived they were averaging 43 passes before a box entry and now it’s 34 passes. They take a bit less now — 110 seconds before they are in your box creating a chance as opposed to 146 before.

“And clearly we are up against a good team that is well-coached, and our expectation is that of a good match.”

Chiefs signing Keagan Dolly, in his first start against Baroka, was the catalyst to their sparkling opening half, though Amakhosi showed they are still far from polished by labouring in the second.

Khama Billiat was expected back from national duty for Zimbabwe on Friday morning, and would only train on Saturday for Chiefs. But the manner in which the underachieving forward appeared sparked to life again by Dolly's presence may see the ex-Sundowns combination start again against their old club.

Baxter was quick to stress that his team remain more of a work in progress than trophy juggernaut Downs.

“I hear what Rulani says, and echo his sentiments,” Baxter said, agreeing both teams have progress left to make.

“We know the quality that Sundowns possess, we've played them recently, we know and how dangerous and slippery they can be to establish a proper press against.

“We also know we are in the throes of trying to put down the supporting walls of a building so we can decorate it nicely a bit later in the season.

“We're happy with where we've gone. We're certainly nowhere near where we want to finish, but we're definitely looking forward to playing Sundowns because you're always guaranteed an interest in both challenge and a game of football.”