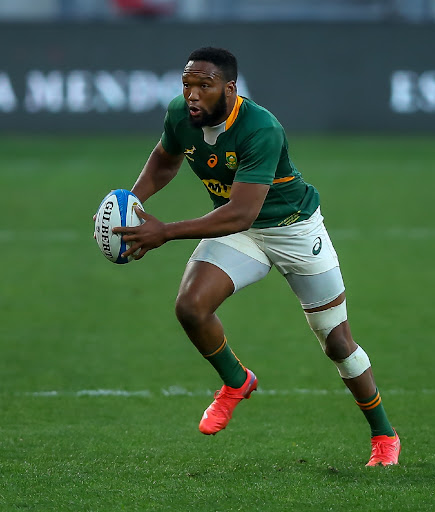 IN CHARGE: Lukhanyo Am of the Springboks during their Castle Lager Rugby Championship match against Argentina at the Nelson Mandela Bay Stadium in Gqeberha.
Image: GALLO IMAGES/GORDON ARONS

Over the last two years, Lukhanyo Am and Damian De Allende‚ both still under 30‚ have formed a storming partnership that has helped the Springboks win a Rugby Championship‚ World Cup and Lions series.

“In SA we are blessed in having had great centres in the backline.

“I think our generation has taken over that responsibility and we are doing a fairly good job and strive to do better at all times‚” said Am, in something of an understatement as the Boks prepared to meet Australia in the third round of the Rugby Championship on Sunday at the CBUS Super Stadium in the  Gold Coast.

South Africa want their four-match sojourn on Australia’s Gold Coast, starting with a clash against the Wallabies on Sunday, to unearth a treasure ...
Sport
6 days ago

“I have played with Damian for just over two years now and I think in the Test matches that we’ve played together I have gained a lot of experience.

“We have learnt a lot from each other and also feed off each other very well — that’s one of the key things for us.

“We aim at doing whatever we can towards the team and it is really working well at the moment.

Since captaining the SA “A” side against the British and Irish Lions in July‚ Am has received glowing feedback from rugby fans as one of the best centres in the world‚ but he credits everything to the team.

“Since we started with the training camp in Bloemfontein in June‚ we have taken over the responsibility of playing for our country seriously and it has really been good playing Test matches again.

“My role in the team is definitely to do my best at all times and we have managed as a team to take up from where we finished off the last time we played‚ which was at the [2019] World Cup.

“We are confident as a team and that gives opportunities to each individual to showcase their performances.”

Am is expecting a bruising encounter against the Wallabies.

“I think Australia have a fairly balanced side‚ with experienced guys and a couple of new faces in the group‚ but that means nothing because you can never underestimate your opponents.

“I think they are playing good rugby and it is just unfortunate for them that they have not been getting the results.

“From our side we are preparing as much as we can to try to be tops this weekend.

“For a new player coming into Test rugby it is definitely a huge step compared with a local competition or franchise rugby.

“For me it was really nice coming into the group where there were experienced players around and that made my job easier.

“I learnt from the senior players as much as I could from the training camps into Test matches.

“The shared responsibility in the group gave bits and pieces of experience that I have learnt up to this stage.”