Bulls director of rugby believes things can only get better 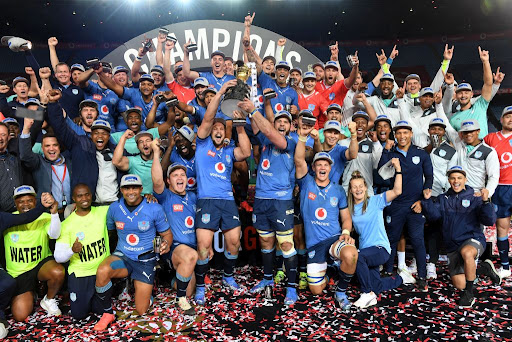 The Bulls celebrate after beating the Sharks to win the Currie Cup final at Loftus Versfeld on September 11, 2021 in Pretoria, South Africa
Image: Lee Warren/Gallo Images

The biggest winning margin ever in a Currie Cup final capped a near perfect season for the Blue Bulls.

They downed the Sharks 44-10 in Saturday's final at Loftus Versfeld, with the cherry on the top arriving when Cornal Hendricks scored a try in the last move of the match to help establish a 34-point winning margin.

The score meant the Blue Bulls surpassed the previous winning margin in a final that they established in their 39-9 humbling of Western Province in 1980.

The win handed the Bulls their 25th Currie Cup crown and their second consecutive title after they beat the Sharks at the same venue in last season's final.

Their inspirational director of rugby and coach Jake White believes his team just about ticked all the boxes. He was particularly impressed with his team's ruthlessness and composure.

The blue dynasty Jake White helped create here has no apparent pretenders to the throne.
Sport
1 week ago

“That was probably close to a perfect performance based on the fact that we took chances when they were given to us. When questions were asked of us, we made the right reads,” remarked White.

While very little separated the teams in the previous final that required extra time, the Bulls hit their stride early this time round. Harold Vorster made a midfield breach near halfway and though his progress was impeded close to the try line, he managed to stretch over. That was the Bulls' first scoring opportunity and they accepted it with glee.

They displayed similar ruthless qualities when Lionel Mapoe also burst through a midfield gap to score before captain Marcell Coetzee barged over to bring variety to their try scoring methods.

White was impressed with his team's ability to maintain control and composure. Their defence was watertight and they also denied the Sharks a foothold by staying within the laws.

“We didn’t give any soft penalties away,” White pointed out. “I think we actually only gave away two offside penalties the whole game, as coaches we’re never really happy. But to be honest, that is how you play rugby. That’s how you create massive amounts of confidence and cohesion,” said White.

White said captain Coetzee had remarked after the final whistle how composed and in sync the team was at times during the final.

“It’s nice to know that the team is cultivating that habit,” said White. “I’m not trying to take anything away from anyone, but we still have a very young team. To get that feedback about everyone being on par and in control is very pleasing.”

That has given the coach huge confidence as his relatively young team head into the uncharted waters of what is expected to be a demanding United Rugby Championship.

“It can only get better from here too, that’s the great thing about it,” said White.