Chippa United crash to first defeat at hands of newcomers 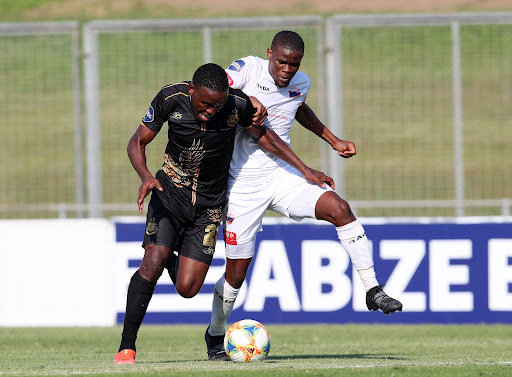 TIGHT DUEL: Victor Letsoalo of Royal AM is challenged by Zuko Mdunyelwa of Chippa United during the DStv Premiership match at the Chatsworth Stadium on Sunday
Image: MUZI NTOMBELA/ BACKPAGEPIX

Chippa United slipped to their first defeat of the season when they lost 1-0 to DStv Premiership newcomers Royal AM at the Chatsworth Stadium in Durban on Sunday.

A Victor Letsoalo penalty just after the break was all that separated the teams but it was enough to give Royal AM their first points of the campaign.

Chippa lacked cohesion in the first half and in the early stages of the second.

They eventually awoke to the cause but it was too late as Royal held out for a famous win.

The Chilli Boys went into the match looking to build on their solid start to the season.

A win in their first match against Sekhukhune United and a draw against Mamelodi Sundowns was as good as new coach Gavin Hunt could have hoped for.

“It’s an away game which is always going to be tough," said Hunt.
Sport
2 weeks ago

Hunt knew Royal AM would be a tricky opponent on the day and so it proved to be at the  Chatsworth Stadium.

Royal had their first shot as early as the second minute, when Ndumiso Mabena had a dip with his right foot only for Chippa goalkeeper Ismael Watenga to make a comfortable save.

Ten minutes later, Chippa’s Bienvenu Eva Nga came close to opening the scoring with his strike from outside the box but it missed to the left.

Royal AM then launched waves of attack but Watenga ensured the home team were kept at bay.

The sides went into halftime deadlocked at 0-0 after Roscoe Pietersen’s shot from the left was blocked in the 42nd minute.

Chippa taking it one game at a time

The 26-year-old joined the Gqeberha side from Mamelodi Sundowns.
Sport
2 weeks ago

The breakthrough came soon after the restart after Chippa’s Riaan Hanamub handled the ball in the area.

Letsoalo was on target with the spot kick sending Watenga the wrong way diving to his right.

Royal AM had a chance to double their lead soon after but Tshidis Monamodi’s effort flew high and wide to the right.

Chippa thought they had levelled the score when Mogakolodi Ngele whipped a left-footed free-kick over the wall at the top-right corner, but Hugo Nyame pulled off a fine save to deny the visitors.

The Eastern Cape side tried as hard as they could to equalise, but were forced to make the trip home with no points to show for their efforts.