Springboks’ reality check as Wallabies beat them at their own game 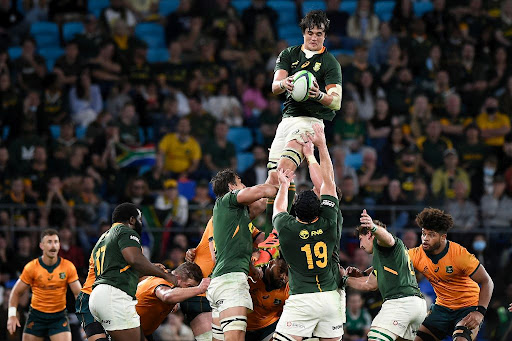 Franco Mostert of the Springboks takes a lineout ball during the Rugby Championship match against the Australian Wallabies at Cbus Super Stadium on September 12 2021 in Gold Coast, Australia.
Image: Matt Roberts/Getty Images

Winning has been the Springboks' most effective riposte to accusations of playing a boring brand of rugby, but that defence was taken away on Sunday by an Australian team with a similar game plan.

After two easy wins over Argentina, the world champions were stunned 28-26 by the Wallabies on the Gold Coast despite welcoming back key reinforcements in number eight Duane Vermeulen and scrumhalf Faf de Klerk from injury.

Apart from the personnel changes, the Boks’ brains trust had seen little need to depart from the trusted formula of power and set piece dominance that underpinned their 2-1 series victory over the British and Irish Lions.

They may be thinking differently now after the Wallabies unlocked their no-frills game with a similar determination to not run the ball.

True to form, the Springboks scored all three of their tries from line-out drives while never really threatening to create one through backline inspiration.

Flyhalf Quade Cooper celebrated his first test in four years by slotting a penalty after the siren that gave the Wallabies a tense 28-26 win over ...
Sport
2 weeks ago

The Wallabies needed only a single try — and 23 points off the tee from recalled flyhalf Quade Cooper — to bring the Boks back to earth.

All Blacks staff were unable to watch the game as they hastened to leave Robina Stadium after their 39-0 win over Argentina in the first match of the Test double-header.

But they will no doubt take interest in the Wallabies’ blueprint for victory when they sit down to watch the video ahead of back-to-back matches against the Springboks.

SA coach Jacques Nienaber will hope to have key attacking weapon Cheslin Kolbe back after he injured his leg in training last week.

He will also look to flyhalf Handré Pollard to kick straighter in the Australia rematch in Brisbane on Saturday after he left valuable points on the field on the Gold Coast.

That may be enough to fend off another siege from the dogged Wallabies but might not be sufficient to stop the rampaging All Blacks in their tracks in two weeks’ time.