'It shows that we are here to play cricket,' says speedster Shabnim Ismail 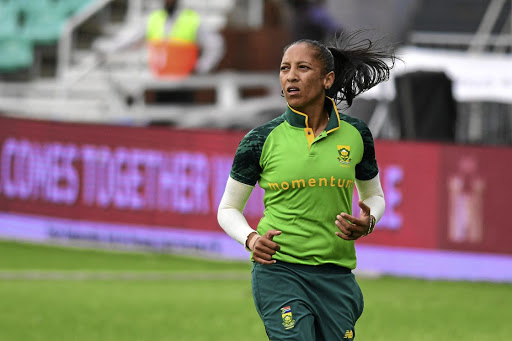 Momentum Proteas speedster Shabnim Ismail is confident the team is on the right track ahead of next year’s World Cup after they clinched their first series win in the Caribbean.

The SA senior women’s cricket team were in imperious form again as they chased down 157 with 13.2 overs to spare to win by 8 wickets and take an unassailable 3-0 lead in the ongoing five-match ODI series against hosts West Indies Women at St Johns in Antigua on Monday.

After two quite days in the opening two ODIs, Ismail returned bowling figures of three wickets for 31 runs in her 10 overs and was awarded the player of the match award.

The Momentum Proteas secured their first series win in the Caribbean when they chased down 157 with 13.2 overs to spare to complete an 8-wickets win ...
Sport
2 weeks ago

“Glad to be back and winning the series for the first time in the West Indies,” said the 32-year-old Cape Town born Ismail, who was consistent with opening bowling partner Mazrinne Kapp as they reduced the West Indies to 10/2 after the first six overs.

“It is always nice contributing to winning performances and obviously for myself coming back into the game taking three wickets for the team is always nice.”

“It is always nice to get on the front foot and get that series over the line.”

The SA bowling unit was so consistent and relentless and the pressure told as it led to two other wickets coming via run-outs.

SA then strolled to a simple chase with the opening pair of Lizelle Lee [78 runs off 120 balls] and Laura Wolvaardt [52 off 68] in their usual destructive mode.

It was Lee’s second half-century of the series after she smashed an unbeaten 91 in the opening ODI and her 22nd of her career while Wolvaardt scored her 21st to set up an easy chase.

The Proteas took an unassailable 2-0 lead after they smashed Sri Lanka by nine wickets to win the second T20 in Colombo on Sunday and seal the ...
Sport
2 weeks ago

Despite a couple of wickets falling towards the latter stages, the opening pair had done enough to lead the visitors to a comfortable series win.

“I can speak about us the bowlers, I think the way we sum up the game, it was not easy conditions to come out here and bowl the way we did so all credit goes to the bowlers,” said Ismail.

“And once again for the batters just coming in and having clinical performances again, Lizelle Lee and Laura Wolvaardt, giving us that confidence booster and just the way they go about their game, it shows a lot out there and it just shows that we are here to do business.”

It is the team’s third successive ODI series and second in succession on the road as they gear up for the World Cup in New Zealand in March and April next year.

Hilton Moreeng’s side whitewashed Pakistan 3-0 in January, beat India 4-1 in a five-match series in Lucknow in March for their first series win in India and lead the ongoing five-match showdown against the West Indies 3-0.

“It boils down basically to our performances and I think the way we have been portraying ourselves on and off the field, it just shows to the world that we are here to play cricket.

“Yes it is baby steps towards the World Cup but the way we are playing our cricket at the moment, it just shows that when we go to the World Cup I’m sure that we are going to give everyone a run for their money.”

The Proteas Women will be determined to sweep the ODI series 5-0 in the remaining two matches on September 16 and 19  as the Sir Viv Richards Cricket Ground.