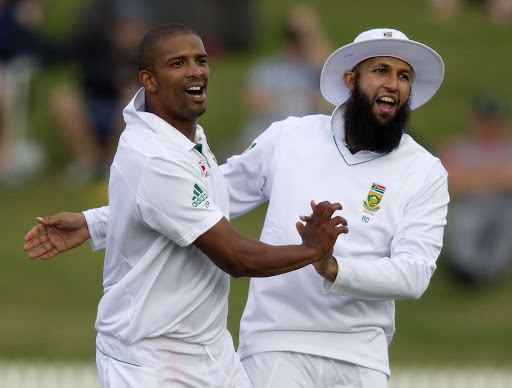 The presence of South African legends Vernon Philander, left, and Hashim Amla in the Western Province playing squad would have been huge for the younger players.
Image: REUTERS/Nigel Marple

Western Province have been dealt a double blow after Hashim Amla decided not to return to SA for the upcoming 2021/2022 domestic cricket season and Vernon Philander accepted an offer to join Pakistan as their bowling coach.

Amla and Philander, who played a combined 450 matches in all formats for the Proteas, headlined the Cape side’s squad for the new restructured domestic season earlier this year and their departure leaves Western Province thin on experience and leadership, and with bat and ball in hand.

Amla said he was grateful to Western Province for their understanding and acceptance of his decision to not return to the South African domestic scene.

“I want to thank Western Province for their open communication throughout the entire contracting process,” said the 38-year-old who owns SA’s highest Test score. “I have made this decision based on where I am in my career and with a view to my future endeavours.”

Walters, who turns 35 next month, has been drafted into the Western Province side for the new campaign and will be eager to hit the ground running in ...
Sport
3 weeks ago

Amla retired from all international cricket in August 2019 but availed himself to play domestic cricket. He has been pivotal for English county side Surrey where he averages a fantastic 51.40 in 12 matches with a high of 215 not out.

“I wish the squad all the best for the coming season.”

Western Province CEO Michael Canterbury said Amla would have been massive in the team’s dressing room and a huge asset to the team on and off the field.

“Especially working with the group of talented young batsmen we have at our disposal,” said Canterbury. “I thank Hashim and his representatives for the open interaction over these past couple of weeks. We all know Hashim is one of our greatest ever-players in SA and we would have loved nothing more than to see him representing Western Province, but we fully understand his reasoning and wish him luck with whatever comes next for him and his family.”

Canterbury will have a double headache after Western Province also lost Philander to the Pakistan senior men’s national team.

The 36-year-old Philander, who announced a shock retirement from international cricket in February 2020 after 64 Tests, 30 ODIs and seven Twenty20 internationals, is also unavailable for Western Province after he was this week named as the Pakistan bowling coach.

Philander, known as the master of swing bowling, was announced as a new member of the Pakistan team along with former Australia opener Matthew Hayden and duo will be in charge at next month's Twenty20 World Cup.

Western Province will start their new domestic season in the Cricket SA T20 tournament against the Lions in Kimberley on September 24. Western Province also announced that replacements in the squad of 16 contracted players will be revealed in due course.

The departure of Amla and Philander follows hot on the heels of Paul Adams, who started his new job as Border head coach in June.

Faiek Davids is in charge of Western Province on an interim basis.

But all is not lost as the Cape side will now look to the experience of Wayne Parnell, Zubayr Hamza and Yaseen Vallie, and promising players Tony de Zorzi, Nandre Burger, Kyle Simmonds, Jonathan Bird, Basheer Walters, Tshepo Moreki,  Mihlali Mpongwana, Aviwe Mgijima and David Bedingham.

They will pin their hopes on Proteas Beuran Hendricks, Kyle Verreynne and George Linde.