McCarthy moans about officiating in AmaZulu's draw with SuperSport 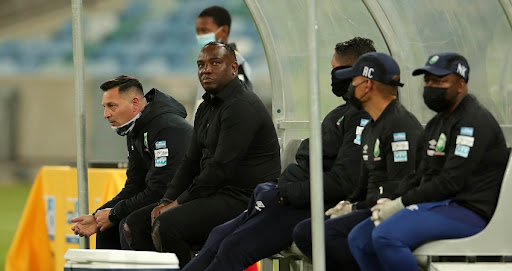 AmaZulu coach Benni McCarthy complained about the performance of the match officials after his side’s goalless DStv Premiership draw against SuperSport United at Kings Park in Durban on Tuesday night.

McCarthy suggested the rulings of referee Thando Ndzandzeka and his assistant referees went against his team, including the decision where Usuthu defender Tercious Malepe was given a straight red card with 17 minutes remaining.

Malepe was red-carded for a rough challenge on Jamie Webber near the centre circle. SuperSport also had a player sent off, though Luke Fleurs' dismissal only came in added time of the 90 minutes.

“It was a very physical game where I think the referee couldn't really control the match,” McCarthy said in the post-match press conference.

“It was one-way traffic. Everything was going in favour of the one team and the other team was not protected. The frustration grew a bit in the game, the tackles were flying in.

“I thought it was a clean challenge, a clean tackle from Tercious winning the ball and not even touching the opposition.”

AmaZulu coach Benni McCarthy has lamented the club's failure to fulfill his wishes to sign a top-class striker after the Durban side's disappointing ...
Sport
3 days ago

“They [SA footballers] wonder why they underachieve. Why they are mediocre is because that's the behaviour where you get opposition players sent off because of diving, and rolling over like his leg was broken, when they even didn't touch him,” AmaZulu's coach said.

“The fourth official sees it right there and he's been speaking to the referee the whole time in his earpiece when we're making a foul. In those situations he told the referee which way to go, but then he sees this situation [diving], and nothing — then we go down to 10 men.”

Last season's runners-up Usuthu went to their third straight league game without a win having been edged 1-0 by Mamelodi Sundowns in their opener, then held 0-0 by Swallows FC at home.

It was the second time in days that McCarthy vented his frustration after a game. He slammed his players' finishing and performance in their 1-0 Caf Champions League first round opening leg defeat to Malawi's Nyasa Big Bullets on Friday, and bemoaned that AmaZulu had not managed to sign a striker.