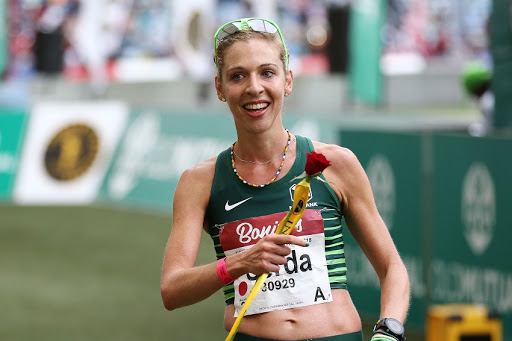 Long distance runner Gerda Steyn has been announced as one of the elite runners for the Sanlam Cape Town Marathon next month.
Image: Anesh Debiky/Gallo Images

The much-anticipated event, scheduled to take place on what is expected to be a relatively flat course on October 17, also boasts some of the best long distance runners on the continent.

Mokoka said his return to the marathon was the result of a deep desire to own the fastest marathon time on South African soil.

“It is no secret that my (late) father-in-law (Zithulele Sinqe) has the fastest marathon time on SA soil. I want to own that 2:08.04 and the fast and flat course of Cape Town is perfect to run that time,” explained Mokoka, the course record-holder and 2018 winner.

The South African 10km and half-marathon record-holder has amassed an incredible marathon CV since turning his attention to the 42.2km – Mokoka has five victories in 15 starts, plus two runner-up positions and one third place.

One of his best performances is the fifth place he achieved at the World Marathon Championships in Doha in 2019.

For Steyn, who qualified for the Olympics after running 2:27.48 at the New York Marathon in 2019, the event has special meaning, as it will be the first time she lines up in a marathon in SA.

“To be able to run against some of the best in my first marathon on home soil is special for me. So that in itself comes with pressure. I put pressure on myself to run well and with ladies on my heels it will be a great race,” she said.

Mokoka will be up against tough opposition in Belachew Ameta of Ethiopia and Emmanuel Oliaulo Ngatuny of Kenya.

Steyn must expect stiff opposition from Kenya’s Lucy Karimi, who finished third in the Geneva Marathon with a time of 2:24.24, and Ethiopia’s Nurif Shimels, who placed second at the Cape Town Marathon in 2019 in 2:27.40.

Also expected to shine in Cape Town is Kenya’s Naomi Jepkosgei Maiyo, who finished fifth in the Cape Town Marathon in 2017.