Baxter ponders next step with Dube, who 'wasn't feeling great' about his Chiefs debut 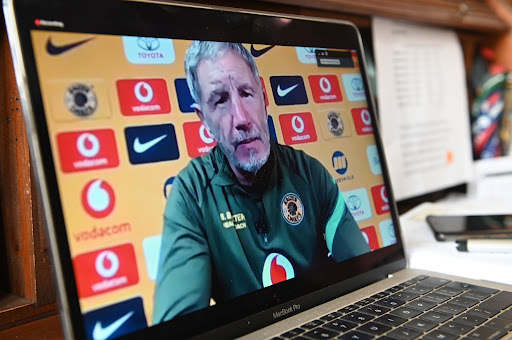 Thabani Dube “wasn't feeling great about his Kaizer Chiefs debut”, Stuart Baxter has admitted, the coach saying he will assess the situation on whether to deploy the centreback again in Saturday's DStv Premiership matchup against Royal AM at FNB Stadium.

Dube, 28, signed from First Division Richards Bay at the start of the season, got a debut and made some costly errors in Chiefs' 2-0 defeat against Mamelodi Sundowns at Loftus Versfeld on Sunday.

The centreback, who drew attention with bright performances when a developmental Bafana Bafana won the Cosafa Cup in Gqeberha in August, was beaten to a header by Grant Kekana for Sundowns' opening goal. Dube allowed Peter Shalulile in front of him too easily for Downs' second, and was taken off by Baxter in the 68th minute.

The noise in the past week over the absence under Baxter of another signing, last season's Premiership defender of the season Njabulo Ngcobo, might also not have helped talented Dube's confidence after a tough debut.

“And you can imagine yourself how he's feeling. I mean, everything you've [the questioner] said [on Dube's mistakes] is factual - it's not pulled out of thin air.

“Of course he wasn't feeling great about his debut, because he would have loved his debut to be swimmingly fantastic and have a fault-free game. But that's maybe Disneyworld and not the football world. So he's got to stand up and be counted now.

“So for the coach, you think, 'Do we ease him out and get somebody else in and give him time to regroup and then go again?' Or do we say, 'No, you don't get pilloried for making a mistake in this team — you get more chances because we believe in you'?

“And that's one that we are going to make a decision on in the next few days.

“We think Austin [Dube] has got potential. He's aware of the mistakes he made because we've spoken about it and about those principles.

“But it wasn't only Austin making the mistakes. If we'd scored a few goals we wouldn't have had the same pressure on us. If we'd set up better at the set play it wouldn't have put him in a position where he really had two players to keep an eye on.

“If we'd had a better blocking player stopping the cross coming in we wouldn't have noticed that he [Dube] lost his marking.

“Football is like that. He is in the spotlight because it was his debut, and because and because ... But we've got to put our arm round him, reassure him and then make a decision on do we ask him to go again, or make a decision that it's better if he steps out of the firing line.”

Some of the noise around Baxter's selections and reaction to the defeat to Sundowns has been valid, though some has also been overly dramatic for a new-look combination still very much in a rebuilding phase from six seasons without silverware.

Chiefs were superb in the opening 45 minutes of their 2-1 win against Baroka FC before the Fifa break, then missed chances against champions Sundowns. One win from four league and cup matches at the start of 2021-22 looks mediocre in the results column, but the performances have been bright.

Still, at the country's biggest-supported club the spotlight is always glaring, and some decisions — such as emerging talent Nkosingiphile Ngcobo being benched having played 40 games in 2020-21 — will cause aggravation among fans.

Baxter will also know that a decent win against Royal (kickoff 5pm) will quiet the noise, for a period.