Wins over Springboks will give Australia belief, says coach Rennie 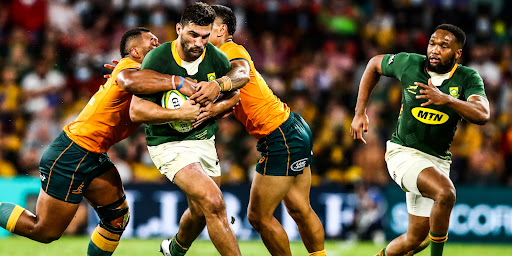 The Springboks will now turn their attention to a more daunting task against the All Blacks while Australia tackle Argentina in the next round of the Rugby Championship.
Image: @Springboks/ TWITTER

The Wallabies handed the Springboks a 30-17 loss in Brisbane on Saturday to follow up a last-gasp victory over the South Africans the previous weekend, although the result was not enough to keep Australia's title hopes alive.

We want to get the country behind us and you've got to give them performances to make them proud. Hopefully we've made a start on that. It certainly gives us belief

“We want to get the country behind us and you've got to give them performances to make them proud,” said Rennie.

“Hopefully we've made a start on that. It certainly gives us belief.

“We've always felt the game we're trying to play is the right type of game for our group. (It's) great to get a couple of results.”

The wins over the world champions come after Australia lost three successive games against the All Blacks to miss out for a 19th year in a row on claiming the Bledisloe Cup against their trans-Tasman rivals.

Centre Len Ikitau and winger Marika Koroibete each scored two tries against the Springboks but, with New Zealand winning 36-13 against Argentina later in the day, the Wallabies' slim Rugby Championship title chances have been extinguished.

“We wanted to back up last week's performance with another strong performance and I thought we beared up really well,” said Rennie.

“We talked a lot about discipline. But I thought we were clinical.

“Against New Zealand we created lots of opportunities but we turned it over and got punished and tonight we were good enough to take those opportunities.”

Springbok assistant coach Mzwandile Stick has come to the defence of Handrè Pollard, who was heavily criticised for his poor kicking display during ...
Sport
10 months ago

The loss of fullback Tom Banks for at least six weeks to an arm fracture sustained in the first half was a downside for the Wallabies as Michael Hooper, making a record-breaking 60th appearance as captain, praised his team's tireless approach.

“The criticism for us in a couple of games this year is that we'd knock off after 40 and allow teams through a 10, 20 minute period to really hurt us.

“I think tonight, if you look at the game as a whole, we were on for the majority.”