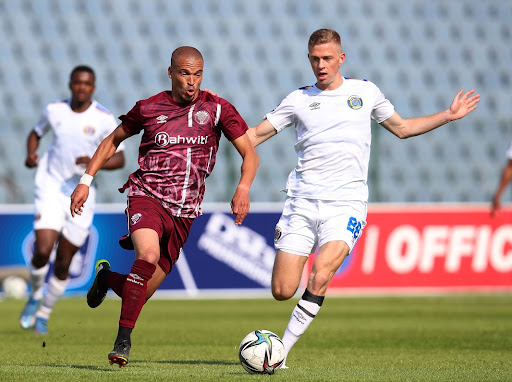 For Jesse Donn, a place in Bafana Bafana coach Hugo Broos' provisional squad for next month's 2022 World Cup qualifiers against Ethiopia is the ultimate motivation that the 21-year-old midfielder is on the right path in his fledgling football career.

Broos' method of announcing a provisional squad of more than 30 players, then a few days later his final squad of just over 20, has a positive motivational spin-off of letting 10 players in the DStv Premiership know that they are being watched.

Under most Bafana coaches, an emerging player like Donn, who played 16 league matches in the past two seasons, would have been named only as a prospect for local-based developmental squads in the Cosafa Cup or Chan, not in World Cup qualifiers.

Broos' boldness in his selections and eye on youth have let the uncomplicated young midfielder who positions himself well and does the basics right, finds his man with his pass and barely gives the ball away, the message that he's in the international framework.

Bafana Bafana coach Hugo Broos has beefed up the Orlando Pirates contingent in his preliminary squad for next month’s crucial 2022 World Cup ...
Sport
2 months ago

“It's an absolute honour to be part of that provisional squad for these qualifiers. It's something every young footballer dreams of from a young age,” Donn said on Thursday, ahead of SuperSport's Premiership matchup against Maritzburg United at Lucas Moripe Stadium on Saturday.

“So in some ways it's hard to believe that I'm getting closer to realising that dream [of international football].

“Obviously I understand it's only a provisional squad and it's going to be hard for me to get into that final squad. I'm going to just keep working as best I can. It really does give me confidence to know that the Bafana coach is watching.”

The departures in the past two years of Bafana veterans Reneilwe Letsholonyane and Dean Furman have opened the way for one of the PSL's youngest combinations to take charge in SuperSport coach Kaitano Tembo’s midfield.

Teboho Mokoena (24) and Sipho Mbule (23) are now the senior heads in a midfield where Jamie Webber (23) and Donn are the next starlets tipped for big things in 2021-22.

Donn has started all SuperSport's five league and cup matches, forging a solid centre pairing with Mokoena as Mbule has been pushed wide.

Among performances that would have caught Broos's eye were back-to-back man-of-the-match awards in SuperSport's 3-1 home win against Golden Arrows on August 25 and 0-0 draw away against AmaZulu on September 14.

Benni McCarthy says he doesn’t need to be inspired by anyone, including a Bafana Bafana coach, to start believing in young players.
Sport
2 months ago

“I've had nice pieces of recognition, which, in all honesty, don't mean much to me — what's more important to me is that the team is performing,” Donn, the well-spoken, well-groomed product of the Ubuntu Cape Town academy, said.

He added hastily: “It is a team sport, and I'm really not just saying that — when the team is successful, I'm successful, and vice versa.

“But I have been happy with the consistency. As a young player you always want to opportunities to play, but the difference between staying a young, immature player and moving to the next level is consistency.

“My first two seasons at SuperSport were difficult. I had to pitch up at training and put in my best and still be put on the bench every week, and stay patient, working hard.

“I feel like those two seasons of keeping patient and keeping a good attitude are starting to pay off now.”

Donn was influential again as SuperSport notched their biggest win of the start of the season, 3-0 against Swallows FC at Dobsonville Stadium on Sunday. Matsatsantsa will aim to stretch their form into their home clash with Ernst Middendorp's tricky Maritzburg.