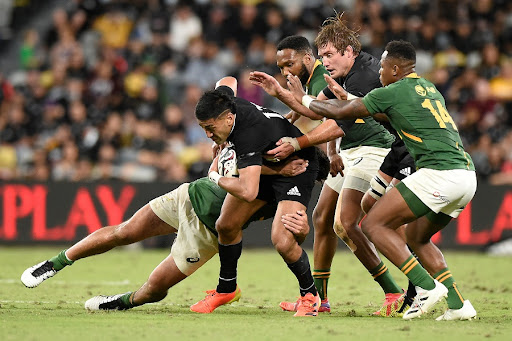 Rieko Ioane of the All Blacks is tackled in the Rugby Championship match against the Springboks at the Queensland Country Bank Stadium in Townsville, Australia on September 25 2021.
Image: Matt Roberts/Getty Images

With this close 19-17 victory, that produced only two tries from Will Jordan and Sbu Nkosi, it was kickers Jordie Barrett and Handrè Pollard who impressed with the boot as they both scored four penalties.

In the historic 100th Test match between the two great foes, the Springboks were left to rue conceding a late penalty as the mighty All Blacks secured this Rugby Championship with their fifth victory on the spin.

The Boks led by a point from the 67th minute when Pollard put away his fourth penalty but the game was snatched away from them three minutes from the hooter when Jordie Barrett found the middle of the poles with his fourth penalty.

The two teams meet again next weekend in the 101st instalment of this fierce rivalry at Cbus Super Stadium where the hugely improved Springboks will be looking for revenge.

New Zealand scored the first try of the match through Jordan after he was set up by a good initial run by Codie Taylor, with Barrett adding the extras from the conversion tee.

An apparent lack confidence within their ranks must be overcome by the battered Springboks if they are to have any chance of toppling a rampant All ...
Sport
8 months ago

SA responded within two minutes when Nkosi touched down after the All Blacks failed to deal with an aerial kick in their own 22, but Pollard missed with his conversion.

Pollard made up for his earlier conversion miss with two penalties in quick succession to give SA an 11-7 lead after 15 minutes, and Barrett reduced the deficit to just one point on the half-hour mark.

The Boks suffered a huge blow four minutes from the break when Nkosi was sent to the sin bin by referee Matthew Carley for a deliberate knock-down and Barrett put away the resultant penalty as New Zealand reestablished the lead.

It is worth noting that the Springboks did not concede a penalty when Nkosi was in the bin as they withstood pressure from the All Blacks in the closing stages of the first half and in the first few minutes after the restart.

Shortly before the hour mark, Pollard put away this third penalty of the match as the Springboks retook the lead but the All Blacks were back in front again a few minutes later when Barrett scored from his own penalty.

Minutes later, the scoreboard changed again when Pollard dissected the poles after NZ were pinged at a strong SA maul but Barrett put away his penalty three minutes from time to secure this victory.