Stormers get their United Rugby Championship season to a disappointing start 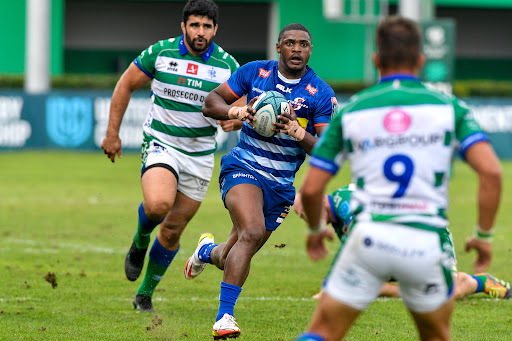 Full-time in Treviso where the home side have come from behind to claim a tense 22-18 win.
Image: TWITTER/STORMERS

For most parts of the afternoon, the Stormers were in control of this encounter but they were let down by their game management.

They went to half time with a four points lead and scored a try immediately after the restart but they allowed Italian side Benetton to claw their way back and claim a 22-18 victory at the Stadio Manigo in Treviso on Saturday.

It is still early days in this inaugural United Rugby Championship (URC) competition and the expectation is that the Stormers will get better but they will have to improve on their poor second half performance.

In the second half, the Stormers conceded 15 points that included a late try from substitute Tommaso Menoncello and they only added seven points to their half time score.

It does not get any easier as they are up against Munster at Thomond Park in Ireland next weekend where they will be looking for their first win of the tournament.

Libbok to bring flyhalf depth at the Stormers

The Stormers' flyhalf stocks received a timely boost with the acquisition of Sharks utility back Manie Libbok.
Sport
2 months ago

The Stormers got off to a good start when Rikus Pretorius scored the game’s first try after two minutes but Manie Libbok failed to convert.

Benetton replied when Gianmarco Lucchesi scored their first try that was converted by Tomas Albornoz and shortly after Libbok restored the Stormers’ lead by one point with a successful penalty kick.

Libbok ensured that the Stormers took a lead to the break with a three-pointer in the closing stages and they scored an early try after the break by Ruhan Nel after he collected an offload from Pretorius.

Libbok, who scored two penalties in the first half, had an easy task of finding the middle of the poles with his first successful conversation of the day after he missed following the opening try by Pretorius.

Benetton reduced the score line just before the hour mark when Ivan Nemer scored their second try from a maul and Albornoz converted it before he brought them to within one point of the Stormers with his first penalty.

Benetton could have taken the lead after 67 minutes but Albornoz failed to find the middle of the poles from a penalty but they got it right later when Menoncello scored their third try that proved too be decisive.