Propelled to victory over the Boks by Jordie Barrett’s late penalty, the Kiwis now look to close the tournament with a sixth win in a row 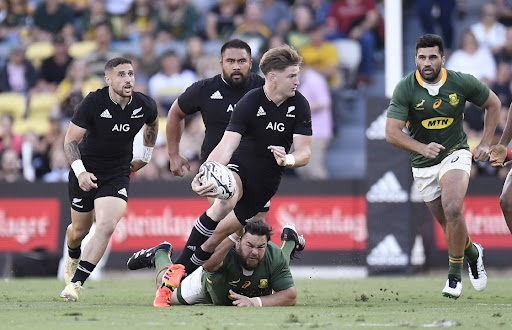 Jordie Barrett of the All Blacks makes a break during the Rugby Championship match between the All Blacks and the Springboks at QCB Stadium in Townsville, Australia, on September 25 2021.
Image: IAN HITCHCOCK/ GETTY IMAGES

Coach Ian Foster wants his All Blacks to focus on claiming their own Grand Slam next weekend when they face South Africa looking for a clean sweep in the Rugby Championship after handing the world champions a narrow loss on Saturday.

Jordie Barrett’s late penalty earned Foster’s side a 19-17 victory over the Springboks that ensured the New Zealanders reclaimed the Rugby Championship trophy with a fifth win in a row in the southern hemisphere competition.

The two teams meet again this week on the Gold Coast to close out this year’s Rugby Championship and Foster is setting his sights on a statement-making sixth consecutive win.

Under pressure Springbok coach Jacques Nienaber has rushed to the defence of his team's kicking strategy after they were narrowly beaten 19-17 by the ...
Sport
7 months ago

“Quite frankly, you go up to the Six Nations and if they win five games they celebrate it as a Grand Slam, and we’ve got that chance now in the Rugby Championship to have a Grand Slam opportunity next week,” said Foster.

“For this group to actually put themselves in that position is huge credit to [captain] Ardie [Savea] and the men for the way they’re gelling together and working hard.

“We know to achieve what we want to next week and get that grand slam we’re going to have to lift a couple of cogs from tonight.”

The All Blacks have dominated this year’s Rugby Championship despite not being at full strength, with Savea serving as stand-in captain in the absence of Sam Whitelock while Aaron Smith and Richie Mo’unga have also been sidelined.

Foster, though, believes his team are continuing to improve. “We are making strides on the physical side of the game and we are making some strides in our ability to deal with set-piece pressure and how we go about it,” he said.

An apparent lack confidence within their ranks must be overcome by the battered Springboks if they are to have any chance of toppling a rampant All ...
Sport
8 months ago

“Clearly we’re not the finished product yet, we know that. But I love the way we stayed in the fight and we problem solved and muscled up. We made that game a massive contest and an arm wrestle type of game that probably wasn’t the game we wanted to have.”

Foster praised the performance of Barrett, who slotted over the winning kick with three minutes remaining as the All Blacks won the 100th meeting between the two nations.

“We knew it was a big game and there’s a whole lot of reasons why it was big: the hundredth and the history of this competition between us,” he said.

“They’re a team we respect greatly and we’ve had a bit of the edge over them recently, but you saw how fine the margins are for us to deliver,” Foster said.

“Hats off to Jordie for that last kick. It was a tough kick.”