Nienaber and Kolisi hurting after defeat to All Blacks 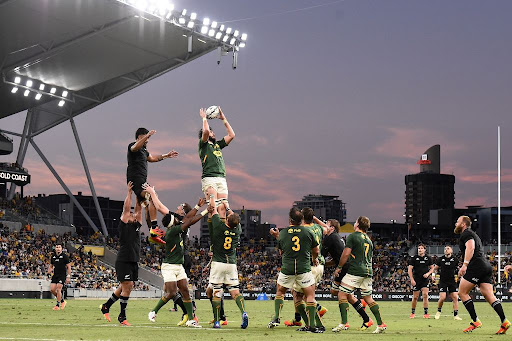 Lood de Jager of the Springboks competes in the line out during the Rugby Championship match against the All Blacks at QCB Stadium on September 25, 2021 in Townsville, Australia.
Image: GETTY IMAGES/ MATT ROBERTS

Springbok coach Jacques Nienaber admitted the 19-17 defeat to New Zealand in the landmark 100th Test between the two nations in Queensland on Saturday is difficult to stomach and hurts.

The Boks, who led the crunch match by one point until the 78th minute, were devastated by Jordie Barrett’s sucker punch in the closing stages when he showed nerves of steel to put away his fourth penalty of the match to see the All Blacks clinch the Rugby Championship.

“We were in it at the end and we put ourselves in a position to win the game,” said a visibly disappointed Nienaber. “Yes I am hurting because we could have pulled it off. We believed that those kicks were effective and they all created one-on-one situations, which was something we wanted to achieve. We had opportunities, they had opportunities.

“A call here, a bounce of the ball there, that was how close it was. We still have a lot to learn. We are still striving for consistency in our game, but [on Saturday] I could not fault anyone’s effort.”

Propelled to victory over the Boks by Jordie Barrett’s late penalty, the Kiwis now look to close the tournament with a sixth win in a row
Sport
3 months ago

The match lived up to its premium billing with the two most successful rugby nations going at each other in what turned out to be a high tempo and close encounter that produced just two tries.

“The closeness of the winning margin was expected,” the Bok coach said. “When the No 1 and No 2 teams in the world play each other, there are always going to be small margins, and results since 2018 have showed that as well.

“I thought we did enough to win it from an effort perspective and the players were excellent, but perhaps we just lacked the composure when it mattered in that last minute or two,” said Nienaber.

Nienaber also pointed out that the Boks have been part of close encounters recently.

“We won the series against the British & Irish Lions with a kick past 80 minutes, and against Australia two weeks ago. Again [on Saturday] we lost with a penalty very late in the game. Sometimes it goes for you, sometimes not, that is the nature of sport.”

Under pressure Springbok coach Jacques Nienaber has rushed to the defence of his team's kicking strategy after they were narrowly beaten 19-17 by the ...
Sport
3 months ago

Captain Siya Kolisi echoed Nienaber’s sentiments and said the defeat was very painful as they strongly believed they would beat New Zealand.

“We had a plan we believed would do that [win the match] and it worked. We wanted to stay in the Rugby Championship and needed to improve after the last two weeks [in the defeats against Australia].

“We wanted to do what we know and do it properly, and we did that well. It was what we expected from the All Blacks, but we coped with it.

“I can’t fault my teammates or coaches and thought we were right in there. Not much went wrong. It does hurt to lose three in a row. [On Sunday] we will analyse what went wrong, but results will come,” said Kolisi.

Nienaber insisted the players did their best on the field.  “This time around we were on song, we had a good week, and the match could have gone our way. I felt we did enough to win,” he said, adding that the players showed they had the belief they could win.