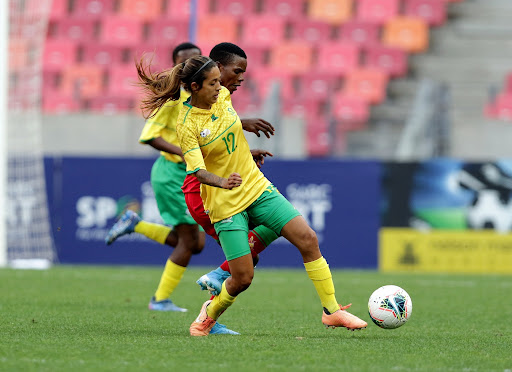 Banyana Banyana coach Desiree Ellis will be looking for an improvement from her team in key departments, but said she was satisfied to start with a 2-1 win against Malawi at the 2021 Cosafa Women’s Championship on Tuesday.

Goals from Melinda Kgadiete in the third minute and Noxolo Cesane in the 37th appeared enough to secure a comfortable Group A victory to defending champions SA at Nelson Mandela Bay Stadium in Gqeberha.

The SA women's national team could have won by far more, missing chances and a late consolation by Wezzie Mvula in the 90th making for a scoreline that flattered Malawi, even in defeat.

The South African women’s senior football team who are the tournament defending champions have dominated the event in recent years and will be ...
Sport
3 weeks ago

“ We always knew it was going to be a very difficult game. They’re a very physical team and they showed from the onset how physical they were going to be,” Ellis said afterwards.

“But we played right into their hands at times by not releasing the ball quicker, by not moving the ball around quicker.

“We scored early which made us settle down and had a few other good opportunities.

“In the second half we knew they wouldn’t stop running. We gave the same instructions as at the Aisha Buhari Cup — that the first 10, 15 minutes was going to be crucial and we almost scored a few times.

“In the final third we didn’t make good decisions at times when players went into good positions and overran the ball sometimes. Their keeper [Samira Amidu] made some good saves.

“But we didn’t hold onto the ball as we should have in the last 10 minutes. I think we finished the game very poorly.

“I wasn’t sure about the free kick and whether [the goal that came from it] was offside or not, but we could still have handled it better. The way we gave the free kick away was silly.

“When the ball came back we didn’t press. You could see it happening but there was nothing I could do about it because the players were slow getting there.

“At times when we put the ball on the ground and played we were in complete control, but we were not consistent.

“The first game of a tournament is always difficult, especially against a top team like Malawi. We’ve played them on a few occasions and it’s always been tough.

“We wanted to start on a good note with three points. We’re not altogether happy with the performance, but it’s a good start to the tournament and that gives us a bit of momentum going forward.”

They are seeking their fifth Cosafa Women's Cup in succession, and fifth for coach Ellis. SA are out to win their eighth title in all.