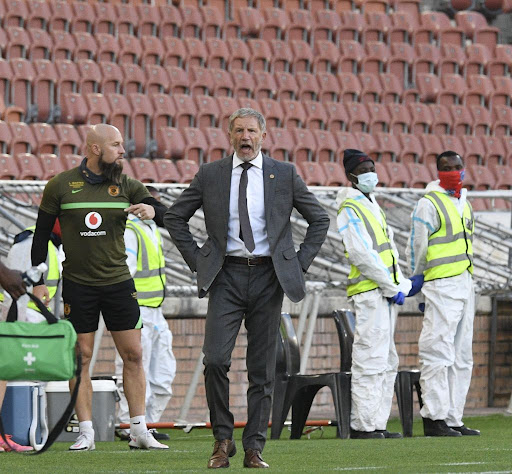 Kaizer Chiefs coach Stuart Baxter has explained the reasons behind the decision to play Njabulo Ngcobo in a defensive midfield role.

The Briton also explained why he left Daniel Cardoso on the bench against AmaZulu at the weekend and elected to partner Eric Mathoho with Austin Dube in the heart of the defence.

“I have to say that (Austin) Dube has been very good at training and we wanted to go back to a 4-3-3, and as a defensive midfield player we wanted to use Cole (Alexander) the way we didn’t use him in the last game,” said Baxter.

“So we wanted to use Njabulo (in a defensive midfield role) and it was new for him and he did OK. He took too many touches at times and was playing more like a playmaker than a destructive midfield player.

“But at times he showed that he’s got qualities in that role and he released Cole and (Phathutshedzo) Nange to get higher, into the box. So we did get more bodies into the box, which is something we spoke about after our last game.

“So when the crosses were coming in we managed to get in on the end of some of them, and when we were attacking we could have combinations because we had the whole group of players. We had the same front three (Keagan Dolly, Bernard Parker and Khama Billiat) and we had Reeve (Frosler) playing left-back.

“I think (Njabulo) Blom is playing really well at the moment ... the best full back in the country at the moment.

“Reeve, who has also got a great engine, could be released a little, knowing that we have got Njabulo (Ngcobo), who is sitting in that defensive role and giving us cover.

“For a long period it worked very nicely. But you can’t lose the ball and give it to the opponents in big transitions when you’re chasing a game, because that leads to a counterattack, and if they lose all those counterattacks, then it would probably be game over.

“But we needed to take a risk and I think the boys, by and large, did a decent job.”

Chiefs scramble late draw against AmaZulu via the penalty spot

A controversial referee’s optional time penalty saved face for Kaizer Chiefs in a 1-1 stalemate against AmaZulu FC in a DStv Premiership at the Kings ...
Sport
2 weeks ago

Turning to the 1-1 draw against AmaZulu  and what it means, Baxter said he’s hopeful of turning the corner very soon.

“In the bigger scheme of things, I think honestly it’s very, very early to look at the table,” he said.

“All the teams at the top of the table, we’re probably going to play all of them again. So if we can take points off them then we close that gap.

“I think it’s really, really important for us, both supporters and staff and players, to look at bringing back together a culture around the team, putting together a team that has an identity and a way of playing.

“When the individual performances get better, we’ll get that 10%, and if we get that 10%, I promise you we’ll be difficult to beat.”