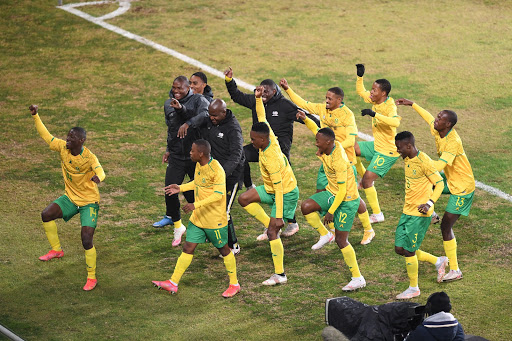 Bafana Bafana coach Hugo Broos is livid after Thabiso Kutumela had to withdraw from camp because he took the vaccination jab the day before.
Image: Lefty Shivambu/Gallo Images

Visibly angry Bafana Bafana coach Hugo Broos has said there are people and clubs who do not have the best interests of the national team at heart after he was forced to withdraw Thabiso Kutumela from the travelling squad.

The Belgian coach said he made the call to release Kutumela after his club Mamelodi Sundowns decided to get the striker vaccinated before reporting for national team camp at the weekend.

A frustrated Broos briefed the media at Dobsonville Stadium in Soweto on Tuesday where the team is preparing before flying to Ethiopia on Thursday afternoon.

Bafana take on Ethiopia in crucial back-to-back 2022 Qatar World Cup qualifiers on Saturday in Bahir Dar and in Johannesburg on Tuesday, and the Belgian said Kutumela’s withdrawal has thrown his plans into a tailspin.

“I am having a feeling a little bit that some people in this country do not want Bafana to become a successful team,” said the 69-year-old Broos.

The Belgian said he is not against clubs’ vaccination drives but questioned why Kutumela had to take his jab a few hours before arriving in camp.

“You can’t organise for players to get vaccinated during the national team camp.

“The Fifa rules says after the last games the clubs have to release the players and no club activity is possible during that Fifa break, but Sundowns organised for Thabiso to be vaccinated.”

Broos said the fact that Kutumela was jabbed a day before he was supposed to join his teammates in camp shows that authorities in SA have little regard for Bafana’s interests.

“Second, which is the most important reason I was angry, if you get vaccinated, you can have symptoms and it is possible that Thabiso, today or tomorrow, can have symptoms like flu, fever or a cough and so I can’t take him with me to Ethiopia.”

Kutumela’s withdrawal is a further blow to Broos after the non-arrival of Orlando Pirates young central midfielder Goodman Mosele, and the withdrawal due to injury of Sundowns centre-back Mosa Lebusa.

Broos said the 21-year-old Mosele “absconded” after the youngster failed to report to camp on Monday, a day after playing a full match for his club at the weekend.

Broos said on Tuesday that he still does not have an explanation for Mosele’s absence from his club or anyone in the national team.

“I never saw something like this in my life, a player who does not come to camp,” bemoaned Broos, who said they still don’t know what is happening with the player. “Goodman did not leave us a message and he is unreachable. We tried to phone him and we do not know the reason he is not here, and so we had to replace him.

“It was a big surprise for me that a player does not want to come to the camp of a national team.”

Teenage sensation Ethan Brooks’s second call-up to the Bafana Bafana squad to do duty in the Qatar Fifa World Cup qualifiers will inspire a lot of ...
Sport
3 weeks ago

Broos said he will speak with the clubs and coaches to try to find common ground.

“I have a feeling a little bit that club level in this country is more important than Bafana Bafana, but clubs have to understand that, directly, they are advantaged if it is good with Bafana.

“The value of the players will increase when you have a good national team and I know what I am talking about because in my country, 15 years ago, nobody wanted Belgian players and now everybody wants a Belgian player [because their national team is doing well].

“So, directly, they  advantage the clubs and the interest [from overseas] in SA football increases when it is good with the national team.”

Broos said SA football has deteriorated to such an extent that the country is not spoken about in discussions at head tables in Europe.

“Sponsors, who is interested in sponsoring SA football right now, there is no interest.”

Broos also referred to an incident he had at Orlando Stadium last week where he was not allowed entry into the Soweto venue when Pirates hosted champions Sundowns.

“Then there was an incident with Orlando Pirates where me and my assistant were not allowed to watch the game.

“I hope that in future it will change and that I will a little bit more co-operation.”