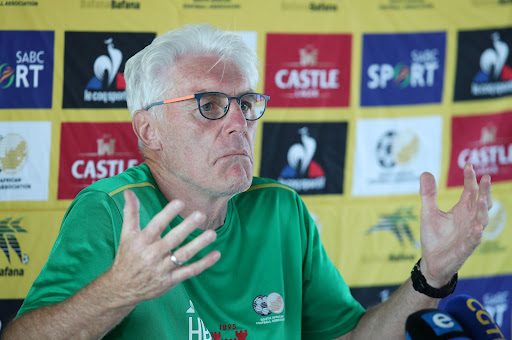 TAKING NO CHANCES: Hugo Broos has been preparing Bafana Bafana at Dobsonville Stadium in Soweto before their trip to Ethiopia.
Image: BACKPAGEPIX/ MUZI NTOMBELA

Hugo Broos has reminded Bafana Bafana that match-days three and four are critical stages of any qualifying campaign and it is at this juncture that teams crash out or gather speed.

Bafana fly out of the country on Thursday to face Ethiopia in crucial back-to-back qualifiers for the 2022 Fifa World Cup in Bahir Dar on Saturday, and in Johannesburg on Tuesday.

The odds will be stacked against them in the port city against an Ethiopian team that is as hungry as Broos’s Bafana in the race to make a push for qualification to the final round.

“We are in front of two key matches,” the 69-year-old Belgian said after a training session.

Broos said he was convinced with what he saw from the players during the three days that Bafana were in camp and training at the Dobsonville Stadium and believes his squad is capable of beating Ethiopia twice, home and away.

“What I saw in training, the behaviour of the players in the group, I am confident that we can win.

“It is just for the players to believe.

“When you play the qualifiers, Afcon or the World Cup, matches three and four are always key matches, always.

“Those are the matches that can be decisive. You can be out of the race or you can be in a very good position.

“For us if we can win those two games, Ethiopia is out of the race and then you have to see what happens in the games between Zimbabwe and Ghana.”

A visibly angry Bafana Bafana coach Hugo Broos has said there are people who do not have the best interests of the national team at heart after he ...
Sport
7 months ago

Bafana top Group G on four points from two qualifiers after a goalless draw against Zimbabwe in Harare and a 1-0 win over Ghana at the FNB Stadium in September.

With Ethiopia and Ghana second and third respectively on three points, and Zimbabwe propping up the group with one point, back-to-back wins will take Bafana to pole position to win the group and go through to the final round of qualification for the Qatar showpiece.

Broos will be hoping that Ghana and Zimbabwe cancel each other out when they meet in the Cape Coast and in Harare on the same day that Bafana tackle Ethiopia.

“It can be that Zimbabwe is also out of the race and that we have five points ahead of Ghana. Our position will be very good if we can realise that.

“But it is not depending only on us. We can win the two games, and if Ghana wins their games it is OK, because we will still be two points ahead of them.”

Goodman Mosele is out of the Bafana Bafana squad to face Ethiopia in crucial back to back qualifiers for the 2022 Qatar Fifa World Cup next week ...
Sport
7 months ago

Ronwen Williams, who replaced Thulani Hlatshwayo as Bafana captain when Broos took over before the start of the qualifiers, said the team was thinking of nothing but taking six points from Ethiopia.

“We know the task that is at hand and it is not going to be easy, but we believe we can achieve it,” the 29-year-old Gqeberha-born goalkeeper said.

“Like the coach said, if we get maximum points then we are at the front door.

“We are excited and so far so good. The spirits are high and we want to keep it this way.”

Williams welcomed the potential of Bafana playing in front of vaccinated fans when the team take on Ethiopia in the return match at the FNB Stadium on Tuesday.

“We are a bit excited that after 18 months, maybe next week, it will be the first time we play in front of our supporters again.

Bafana’s camp has been a bit chaotic after Broos revealed on Monday that Orlando Pirates central midfielder Goodman Mosele had “absconded” from camp without any explanation.

The situation was worsened when Mamelodi Sundowns centre-back Mosa Lebusa was turned back by Bafana Bafana doctors on account of being “unfit”, while his teammate Thabiso Kutumela was ruled out after it emerged that Sundowns administered a Covid-19 vaccination on the striker the day before camp.