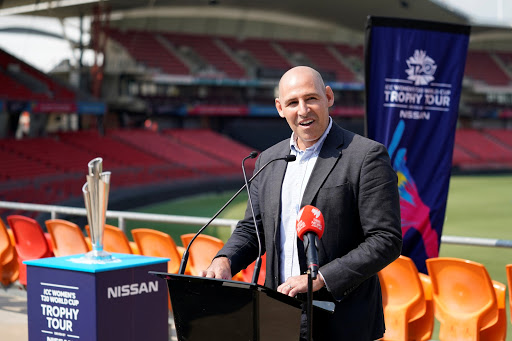 Cricket Australia boss Nick Hockley says once the players are out of quarantine they will be working to offer them (Covid-19) vaccinations before heading off to the West Indies.
Image: Mark Evans/Getty Images

Australia is eyeing a 2023 window to reschedule the three-test series of South Africa after pulling out of the tour earlier this year, Cricket Australia boss Nick Hockley said on Thursday.

CA called off the tour in February citing health risks, a decision greeted by disappointment and frustration in South Africa.

"We've been working over recent months to look to reschedule, and we think we've found a window in the calendar in 2023 to reschedule that tour," Hockley told a media conference after CA's annual general meeting.

"Our relationships with South Africa are very strong.

"As we said at the time, we were very disappointed and I know our players were extremely disappointed not to be able to go to South Africa."

Now we know how players can be battered by cricket

Their mental health can be severely tested while on tour, something we can now appreciate
News
1 week ago

Hockley declined to elaborate which part of 2023.

Australia is to host South Africa in a three-match series over its home summer in 2022/23 before a white-ball tour of India in early-2023 according to the International Cricket Council's Future Tour Programme.

Australia have not played a single test overseas since the COVID-19 pandemic and have postponed multiple tours, citing health risks and player welfare, despite some players' willingness to play in the lucrative Indian Premier League.