'I’ve always wanted to prove myself against the best,' says Lions flanker Tshituka ahead of Ulster clash 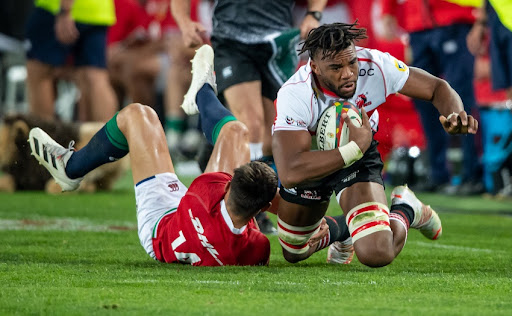 Vincent Tshituka in action during the tour match between the Lions and the British and Irish Lions at Ellis Park on July 3, 2021 in Johannesburg.
Image: Anton Geyser/Gallo Images

Lions flanker Vincent Tshituka is still livid about his side’s performance in the United Rugby Championship and remains hopeful of a victory in their next match when they clash with table-topping Ulster in Belfast on Friday.

The 23-year-old former Northcliff student said he was excited about the opportunity to play in a major international tournament where some of the best young talents would be playing.

While Tshituka may feel disappointed, the Johannesburg-based side have given a decent account of themselves in the URC‚ winning their first match and proving highly competitive in two ensuing defeats.

“It’s absolutely incredible for me to test myself against the best,” said Tshituka.

“I’ve always wanted to prove myself against the best in the game and in this competition  I get to play at the highest level against international players.

“This competition gives so many young players that opportunity, and it’s very exciting for me.”

Feisty and full of fight in the second half, the Lions still came up short in their United Rugby Championship clash against Glasgow Warriors on ...
Sport
2 weeks ago

Born in the Democratic Republic of the Congo‚ Tshituka only started playing rugby in Grade eight. He matriculated at Northcliff High School and, by his own admission, he used to handle the rugby ball like a loaf of bread.

He conceded that he never dreamt of becoming a professional rugby player and making a career of it.

“I was actually a soccer player in primary school,” he said.

“Then I went to Northcliff High and they didn’t offer soccer. I still wanted a team sport and loved the team environment.

“So in Grade 8 I started playing rugby. It was just for fun really [and] I never expected to make a career out of it.

“I played all over the place. I played in the A, B and C teams. I started off at wing, moved to flank and then lock, and now I’m back at flank again.

“Then in my final year at high school I played in the Academy Week, and that’s where the idea began to form in my head that it would be quite nice to be a professional rugby player,” he said.

“Northcliff High had never produced a professional rugby player, so it wasn’t like there was an example for me to follow.”

The varsity Young Guns tournament presented Tshituka with the opportunity to make his mark.

“I joined the University of Johannesburg and started playing for their Young Guns. I had a four-year plan from matric until now,” he said.

“My plan was that while I was studying at UJ, I hoped to get one or two caps at the Young Guns in my first year.

“Then the plan was to maybe become a campaigner for them in my second year. Then in my third year, maybe play one or two Varsity Cup matches, and then in my fourth year of graduation play an entire Varsity Cup season.”

He said the career trajectory has worked out a lot better than he ever imagined.