More than 20,000 fans for Bafana's next match, no more unvaccinated journalists, vendors 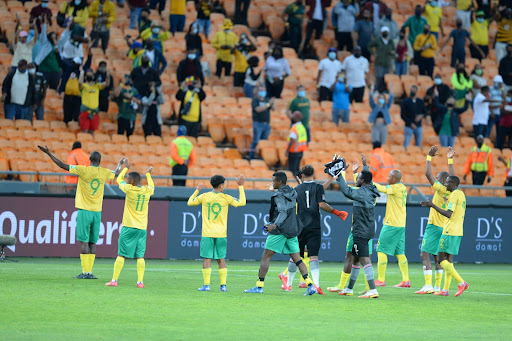 Bafana Bafana players celebrate with supporters after the 1-0 win over Ethiopia in front of 2,000 vaccinated fans at FNB Stadium on October 12 2021.
Image: Lefty Shivambu

The SA Football Association (Safa) is considering increasing the number of supporters from 2,000 to more than 20,000 for Bafana Bafana’s next match at home against Zimbabwe next month, but everyone, including the media, security and vendors, will have to produce a vaccine certificate.

Bafana beat Ethiopia in front of 2,000 vaccinated supporters in a 2022 Qatar Fifa World Cup qualifier at FNB Stadium on Tuesday and TimesLIVE has been reliably informed that there will be more than 20,000 screaming fans when the national team host the Warriors at the same 94,000 capacity venue on November 11.

Safa communications manager Dominic Chimhavi said given that the return of fans against Ethiopia was a pilot project that turned out to be a success, the association is considering allowing more fans for Bafana’s next match.

But Chimhavi said there must first be a thorough consultation process and that it was too early to start mentioning numbers.

“We have already started preparing for the Zimbabwe game and we are going to engage various stakeholders to suggest increasing the percentage of those attending the next game.”

‘All hail the band of Broos’: Mzansi falls ‘back in love’ with Bafana Bafana

"If Bafana Bafana qualify, I'm going to save my R350 and go to Qatar to watch them," joked one fan.
Sport
2 weeks ago

Safa is on a countrywide charm offensive along with stakeholders to encourage the football community to embrace a vaccination drive.

“That is the only way the football economy can be resuscitated and if we are to return to normal good old days.”

Several journalists who have not taken the jab were turned away at the stadium along with hundreds of unvaccinated supporters after failing to produce vaccine certificates.

The journalists pointed a finger of incompetence at Safa officials and said that they were not told during the accreditation process that they needed to have vaccine certificates handy to be allowed in. Some journalists who have not yet taken the jab said they would not have bothered to go to the stadium if it was made clear to them from the onset.

The journalists said they were not required to produce the certificates during media activities with the team building up to the match and thought that the same arrangement would apply on match day.

Chimhavi said the days of unvaccinated members of the media attending Bafana activities are over as Safa will start to enforce a strict vaccination policy for everyone.

Bafana coach Hugo Broos happy with progress, but yet to find the best combination

Bafana Bafana have showed marked improvement under coach Hugo Broos, but the Belgian mentor says he has not yet found the best combination.
Sport
2 weeks ago

Journalists have stopped attending domestic matches and physical interactions with players and coaches since football resumed under Covid-19 protocols without fans.

“Not only journalists but everyone involved, including security guards, caterers and so on No vaccination, no entry.

“This is a win-win situation for everyone. Get vaccinated and grow the country in every aspect,” said Chimhavi.

The successful hosting of fans for the Bafana match against Ethiopia was celebrated across the country and it is believed that the Premier Soccer League will follow in the mother body’s footsteps.

There was a glimmer of hope on Wednesday after the league’s executive committee resolved to use the October 30 MTN8 final between Mamelodi Sundowns and Cape Town City at Moses Mabhida Stadium in Durban as a pilot project for the return to stadiums for domestic football.

“The executive committee will meet again within the next seven to 10 days to assess the outcome of the consultation process and the PSL will communicate the approach that will be implemented after the meeting,” the league said.

The domestic Premiership returns this weekend with no fans after the Fifa international weekend.