It feels like the US has accepted F1, says Hamilton 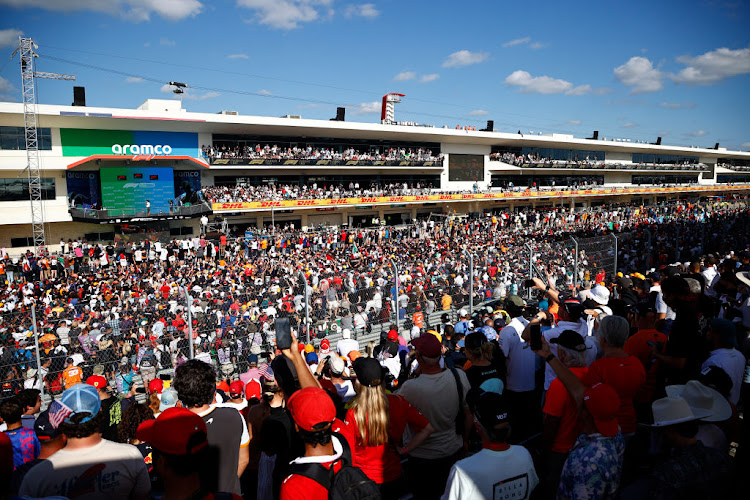 A general view of the podium celebrations with race winner Max Verstappen of Netherlands and Red Bull Racing, second placed Lewis Hamilton of Great Britain and Mercedes GP and third placed Sergio Perez of Mexico and Red Bull Racing during the F1 Grand Prix of USA at Circuit of The Americas on October 24, 2021 in Austin, Texas.
Image: Jared C Tilton/Getty Images

Lewis Hamilton had to settle for second but Formula One's most successful driver said Sunday's US Grand Prix in Austin still felt like a breakthrough for his sport.

The race day crowd of 140,000 at the Circuit of the Americas surpassed the 135,000 who attended the Indianapolis 500 in May, then the largest sporting event in America since the start of the pandemic.

The three-day crowd figure for the race in Texas was given as 400,000.

"It feels like this is our acceptance into the US," Hamilton, a five-times winner in Austin, said as he surveyed the scenes after the race.

"I hope we get more races out here and I hope that the sport continues to grow because you can tell just how great the fans are out here."

There was no race in Austin last year due to the Covid-19 pandemic but Formula One will have two US rounds next year, with Miami making its debut.

Andretti entering F1 would be a logical move, says Stroll

US-based Andretti Autosport would be a great addition to Formula One if reported takeover talks with Sauber come to fruition, according to Aston ...
Sport
8 months ago

There has also been talk of further expansion, with Las Vegas seen as the most likely candidate.

While there are no US drivers, the sport has been owned since 2017 by US-based Liberty Media who have targeted America as a key growth area.

The sport struggled to make inroads in the past, particularly after an infamous six car race at Indianapolis in 2005 left huge reputational damage.

"I think Netflix has been outstanding for Formula One. It’s driven a younger fan base, it’s driven a much larger fan base. It’s really had an impact in America," said McLaren's American boss Zak Brown.

"I think it’s doing what we as a sport would like it to do, which is turn on a bunch of new fans. I think it’s been hugely successful."

"We were not keen at the beginning of Netflix because we wanted to concentrate on on-track performance and I was wrong. It’s clearly a big success," he said.

"Everywhere in the world it was the number one documentary on Netflix for quite a while and it’s become part of Formula One and you can clearly see it’s beneficial ... the feedback that we get from fans is tremendous, especially here in the US."

The attendance may also have been boosted by the lack of a race last year and the pandemic effect, with bottled-up demand for mass gatherings.

Mexican Sergio Perez's move to Red Bull this season as a race winner in a competitive car was another significant factor for fans from the region.