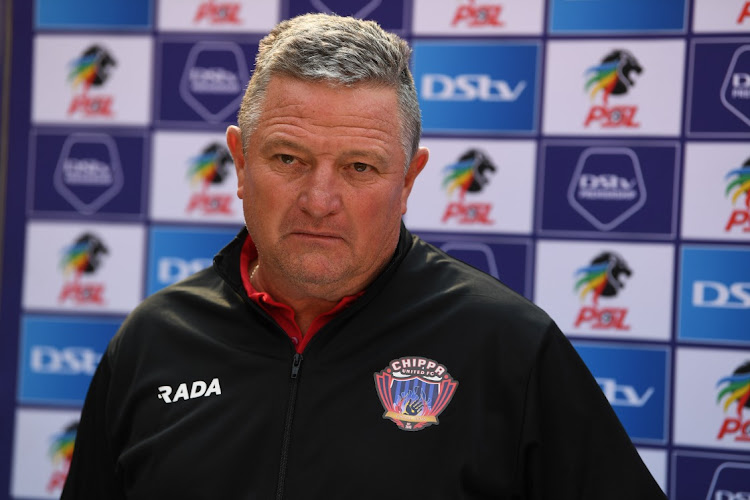 UNDER THE WHIP: Chippa United coach Gavin Hunt is not a happy man after yet another disappointing result
Image: LEFTY SHIVAMBU

A goal by Cape Town City’s Abdul Ajagun in the penultimate minute of regulation time sunk Chippa United deeper into the relegation zone on Wednesday.

The Chilli Boys experienced yet another loss in the DStv Premiership when they went 1-0 at the Cape Town Stadium.

Chippa extended their winless run to eight matches and dropped to 14th position on the log.

Victory was sweet for City, who bounced back after the disappointment of their defeat on penalties to Mamelodi Sundowns in the MTN8 final at the weekend.

Once again, Chippa’s inability to score was the biggest letdown, despite having created more opportunities than their opponents.

Coach Gavin Hunt said he was disappointed with the result.

“I thought we had some unbelievable chances,”  he said.

“They had maybe two the whole game and they scored in the 90th minute.

“I thought we had unbelievable chances again around the box, but you have got to take them.

“It’s disappointing  — we had more opportunities, but the problem is the scoring for us.”

“Physically it was always going to be difficult this game, both physically and mentally for the players considering how we lost the MTN8 final,” he said.

“You could see the effects of the loss still at training on Monday and Tuesday, so that was a big concern for us today [Wednesday] leading into this game and it was a tough game.

“We started fairly well, I thought the first 20 minutes we looked OK.

“But there were too many changes.

“I think there were five —  some of them were forced — so there wasn’t really that continuity and constancy and we struggled against Chippa.

“We didn’t really create any chances to score.

“They are a difficult side to play against because they play very direct and looked to play the two-ball, and there were a lot of crosses and it became a very ugly and cagey game for us.

“We made a change at halftime hoping that change would get us going a little more, a little more possession and create chances but we didn’t even have one chance.

“Today one shot on target on goal and you win the game.

“I’ll take that and I think the team will take that because mentally and physically we needed this win.

“I am happy with the three points,” Tinkler said.