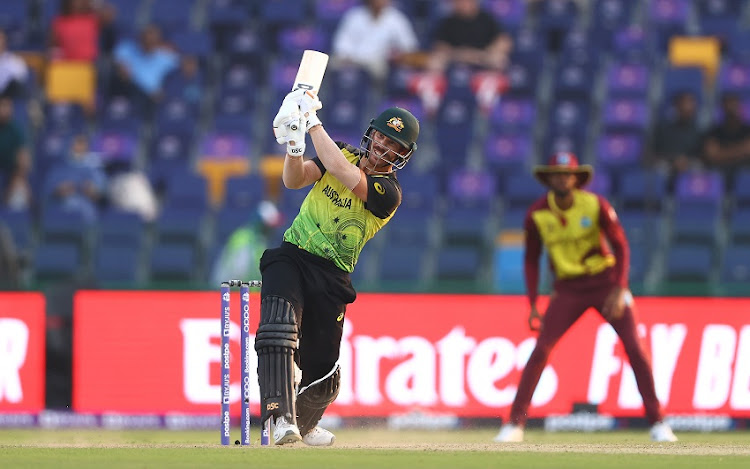 David Warner struck a 56-ball 89 after paceman Josh Hazlewood's four-wicket blitz to help Australia beat the West Indies by eight wickets in Abu Dhabi on Saturday and put themselves in a commanding position to make the Twenty20 World Cup semifinals.

Australia have eight points from five matches, level on points with an in-form England who play South Africa later in Sharjah. The Proteas, who have six points in Group I, face a daunting task to remain alive in the tournament.

SA need win by a 61 runs or more against England on Saturday night to go past Australia on net run rate.

Proteas captain Temba Bavuma has acknowledged their fate to qualify for the semi-final stage of the ICC T20 World Cup in the United Arab Emirates is ...
Sport
7 months ago

"It was a really pleasing day. I thought it was going to be a long day the way Evin Lewis played," Australia skipper Aaron Finch said.

"We held our nerve nicely."The way David managed his innings, got off to a flier and allowed Mitch to get into his innings. He's been a super player for a long time. I can't understand why people doubted him.

"Earlier, Australia paceman Pat Cummins struck a vital early blow by forcing Chris Gayle (15) to chop one on to his stumps in the third over after the 42-year-old Jamaican had issued an early warning of his prowess with two massive sixes.

Gayle walked off the pitch with his bat raised and a smile on his face prompting fans to speculate online over whether this may have been his final innings. But the West Indies were not in a celebratory mood as Hazlewood took two wickets in three balls.

Nicholas Pooran departed offering a simple catch to Mitchell Marsh before Roston Chase had his stumps shattered to leave the outgoing champions in trouble at 35-3 inside four overs.

To be able to get the better of England during the highly anticipated ICC T20 World Cup match in Sharjah on Saturday and stay in contention for the ...
Sport
7 months ago

Leg-spinner Adam Zampa then picked up his 11th wicket of the Super 12 stage by dismissing Lewis for 29 as the West Indies' slide continued, but a solid effort by skipper Kieron Pollard (44) took them to a respectable 157-7.

Hazlewood also dismissed Shimron Hetmyer and the retiring Dwayne Bravo to finish with figures of 4-39.

"Overall it's been a disappointing campaign. In terms of the batting, we've not done well at all. Our bowling has been decent but not good enough," Pollard said.

"It's the end of a generation, we have some guys who have done good things for T20 cricket in our team and around the world. We as people are proud. We have to look at the way we play T20 cricket."