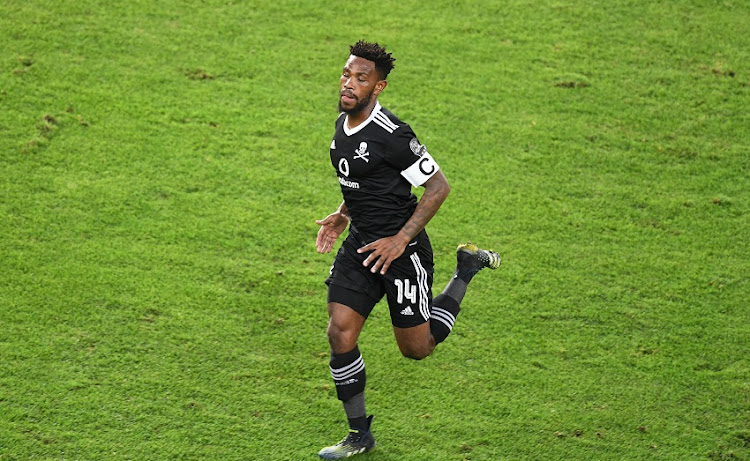 Two crucial mistakes by Orlando Pirates central defenders Thulani Hlatshwayo and Olisa Ndah in the second half against Soweto rivals Kaizer Chiefs cost the Buccaneers the three points in a DStv Premiership clash at the FNB Stadium on Saturday.

It was a game that Pirates dominated possession-wise, but the failure to find their strikers with the final pass proved to be their undoing, The defeat leaves Bucs co-coaches Fadlu Davids and Mandla Ncikazi with a lot to improve in the coming weeks of the 2021-2022 campaign.

This is how the Pirates players rated on Saturday [they were rated out of 10]:

Siyabonga Mpontshane (5): He didn’t have much to do except pick up the ball from the back of net after errors by Hlatshwayo and Ndah led to Keagan Dolly opening the scoring in the 49th minute and then adding the second from the spot with a penalty right at the death.

Abel Mabaso (6): He was the better player in Bucs' defence and helped his team when in possession going forward. Hardly lost possession and kept Dolly in his pocket most of the time, except for when he was also caught off position in the first goal. But it was not his fault and rather his skipper Hlatshwayo who made a poor back pass when most of the Bucs players were in attack.

Paseka Mako (6): Like Mabaso, Mako kept the Bucs’ shape and always assisted in attack, feeding Deon Hotto, the Bucs left winger, with  a lot of balls to go forward on the flank. When the Bucs were desperately searching for an equaliser, Mako put his hand up and was central to these endeavours.

Kaizer Chiefs put in a gritty performance to edge play and the scoreline, appeared to throw victory away, then profited from a late penalty to snatch ...
Sport
3 weeks ago

Olisa Ndah (4): The Nigerian didn’t put a foot wrong until he lost his temper right at the death when he roughly pulled Khama Billiat down inside the area. He left referee Victor Hlungwani with no option but to point to the spot. He may have survived the referee’s call had he not used his hands on Billiat. Otherwise he helped his team thwart many of the Chiefs attacks and wasn’t bad at all on the ball in his first Soweto derby. He’ll learn.

Thulani Hlatshwayo (4): It beggars belief that a former Bafana Bafana captain committed the kind of mistake that Hlatshwayo perpetrated with the ill-timed back pass he delivered  to help Chiefs open the scoring. It was horrendous and unbelievable. Hlatshwayo had commanded his troops very well before making the blunder, which was really unnecessary because he could have kicked the ball out for a throw. The defender was also lucky in the first half that the referee did not award a penalty against him for handling the ball inside the area after blocking Njabulo Ngcobo’s shot with his hand. Overall, it was a regrettable day for the Bucs skipper.

Thabang Monare (6): Monare did his job with diligence. He was always where he was supposed to be in the middle of the park and didn’t waste a lot of possession. Did well to stay and support the defence when in attack. He didn’t deserve to be on the losing side.

Fortune Makaringe (6): He should have given Bucs the lead going to the break, but his header off Linda Mntambo’s cross was poorly executed after a promising build-up. That he remained on the pitch for the entire match showed how vital he was in the Bucs midfield.

Ntsako Makhubela (4): Makhubela didn’t use his skills well. At times he wasted the ball while trying to show off when his team was not even in the lead. He seemed not to understand the occasion and it wasn’t a surprise to see him substituted on the hour mark. Makhubela had a poor debut in the Soweto derby and this is unfortunate as he could have given Pirates plenty of opportunities going forward.

Linda Mntambo (7): A bright spot in Bucs’ attack and it wasn’t a surprise that it was Mntambo who reacted quickly and scored the equaliser for his team when Chiefs’ goalkeeper Daniel Akpeyi failed to hold on to substitute Kabelo Dlamini’s header in the 87th minute. Provided that great cross that was wasted by Makaringe on the stroke of halftime.

Deon Hotto (5): The Namibian had an off-day by his standards and was substituted in the 70th minute. With Paseka Mako helping on the left, he could have helped the Bucs a little bit more in the desperate search for goals.

Kwame Peprah (5): The young Ghanaian tried his best in the few chances that he got. He started the second half with a good shot in the first minute and continued to make himself available for goals until he was substituted in the 70th minute. Not a bad debut in the Soweto derby but unfortunately for him, he had little to show for his effort.

Substitutes: Kabelo Dlamini (5): He came on for Makhubela in the 60th minute and assisted in the Bucs equaliser with his header parried by Akpeyi onto Mntambo’s path. The other subs had little time and influence on the game to be mentioned.