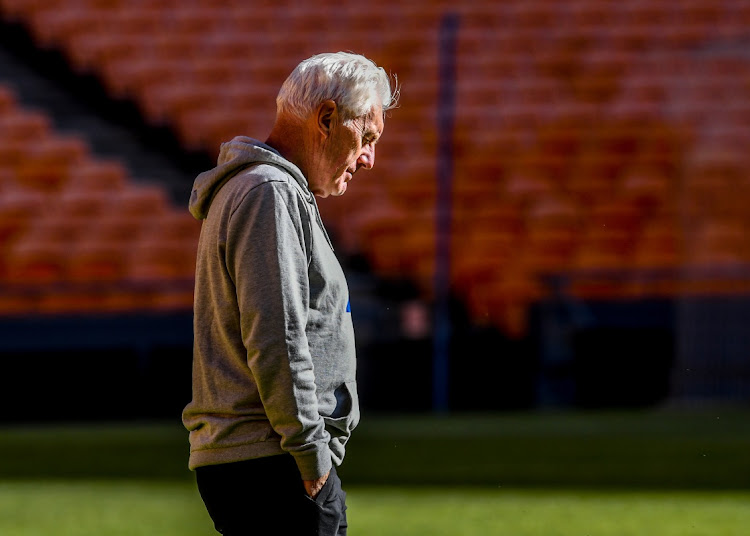 Bafana Bafana coach Hugo Broos has revealed he is pleasantly surprised by how quickly his players have adapted to his methods and made a strong bid for a place in next year's Fifa World Cup in Qatar.

The 69-year old Belgian was hired in May but could not get started in the job as he had to return home for his second Covid-19 vaccination soon after his appointment. He knuckled down to work in September ahead of the start of the 2022 World Cup qualifiers and has presided over a massive transformation that has seen Bafana surge to the top of a qualifying group that also includes Ghana, Ethiopia and Zambia.

Broos admitted he is as surprised as those who are stunned by the new-look Bafana's rapid metamorphosis under the outspoken coach.

"Maybe you will be surprised that I'm surprised we are now in this position [top of the group and with their destiny in their own hands]," he said.

"Three months ago I think if you had said to someone we will be first [in the group] before the 2022 games [the World Cup in Qatar], everybody would have laughed at that [prediction].

"We did a fantastic job until now, and the players have been fantastic. I took a chance on players and made choices. Sometimes my choices were not good and certainly when you see the 23 players [in camp], you can see they have changed during the games in the past few months.

"It was very difficult for me to make the [first Bafana squad] selections because I did not know so much about SA football. Now I know much more about them [the players] and I think what we are doing now, and while I like players like [Keagan] Dolly who were with Bafana [in the past] and suddenly were not there, has worked out. Those are things that can make things better."

Broos also reiterated his unhappiness that the World Cup qualifier between Ethiopia and second-placed group rivals Ghana will be played at the Orlando Stadium in Johannesburg  this week. ​

Bafana had to work very hard to beat Ethiopia 3-1 on a disastrous pitch at Bahir Dar stadium in October and Broos hoped Ghana would also be confronted by the same difficulties when they faced the East Africans in the penultimate round of the group qualifiers this week. But Fifa and the Confederation of African Football said the venue did not meet acceptable standards to host Ghana. The game was moved to Orlando Stadium at Ethiopia's request.

Broos is livid Ghana will not have to deal with the difficulties of playing at Bahir Dar Stadium and now face the Ethiopians at a top venue with a world class pitch.

"This is not fair. What happened is really not fair," said an upset Broos in a blunt assessment of the decision.

"Two countries played in that stadium [Bafana and Zimbabwe played at the venue], in very bad location, very bad stadium, very bad pitch and we had to do it [find a way to beat Ethiopia under difficult circumstances]. Lucky for us we did it.

"With Zimbabwe, it was a very important game for them too [the Zimbabweans lost 0-1 in September]. So they also had to do it [play at Bahir Dar stadium]. Now suddenly Ghana can play their game [against Ethiopia] in a paradise [in Johannesburg at Orlando Stadium]. This [SA] is  a paradise compared to Ethiopia. They have to travel [to SA], but it is a direct flight from Accra to Johannesburg. It is not fair and I do not understand Fifa in these kinds of things.

"They first approve a stadium and have two games played at the stadium. Then suddenly it is not approved."

Bafana are one point ahead of Ghana in their World Cup qualifying group and need to beat Zimbabwe at home on Thursday, and then perhaps get a point away against the West Africans on Sunday.

The winner of the group will play a play-off against one of the nine other group winners in Caf qualifiers and if they win that play-off, they will have earned a ticket to be among the five teams that will represent the African continent in Qatar next year.