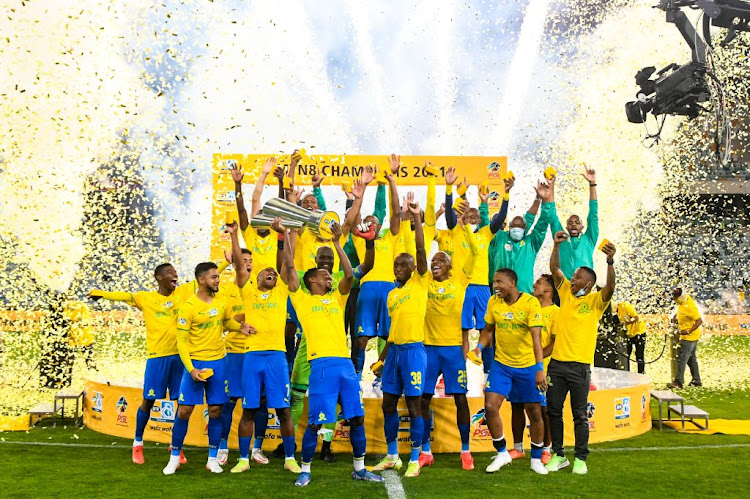 Mamelodi Sundowns are looking to acquire as many points as possible before the Christmas break, according to co-coach Manqoba Mngqithi.
Image: Darren Stewart/Gallo Images

Juggernauts Mamelodi Sundowns' quest for an unprecedented fifth successive Premiership title will take a back seat for the next two weeks as focus shifts to the national team, and co-coach Manqoba Mngqithi has welcomed the break, even though it comes at a time when his team are firing on all cylinders.

Sundowns underlined their intention to retain the DStv Premiership title they have won for the past four years in a row with a merciless 4-0 mauling of  bottom club Marumo Gallants away in Polokwane on Sunday to open up a five-point lead at the top with a game in hand at almost halfway through the season.

The champions lead the way with 25 points from nine matches and have a game in hand over their closest challengers, who have mostly had 10 outings.

They are on a menacing run of form that has seen them become the first team in the history of SA football to go on a run of 12 successive clean sheets stretching back from last season. They broke a new record in the Premier Soccer League era of 22 successive wins away from home, which stood since 2005.

Even though Sundowns are in cruise control, Mngqithi believes the Fifa international break comes at the right time for the star-studded defending champions.

Mamelodi Sundowns’ women’s team got off to a winning start to the inaugural Caf Women’s Champions League finals tournament in Cairo with a 1-0 win ...
Sport
3 weeks ago

Sundowns have played 15 matches in all competitions from August 15 to November 7, which included three Fifa breaks in September, October and this month, romping to an unbeaten league run in nine matches, advancing to the group stages of the Caf Champions League and winning the MTN8 cup.

Mngqithi said the break was necessary to allow teams to recharge their batteries, as it will be an uphill battle when the Premiership resumes with a trip for Sundowns to Cape Town City on November 20.

“The marathon we are going to have after this Fifa break is going to be harsh for every team in the league because after the break we are looking at playing about 11 matches, if I am not mistaken, and that is not going to be easy for many teams,” the 50-year-old Umzimkulu-born coach said.

Mngqithi said Sundowns will be determined to put distance between themselves and their title rivals by the time Christmas arrives.

“In a space of close to six weeks we are expected to play 11 matches and many teams will crumble there and that might give us a benefit maybe to acquire as many points just before Christmas.”

Unbeaten Mamelodi Sundowns moved five points clear at the top of the DStv Premiership table with a clinical 4-0 mauling of winless Marumo Gallants in ...
Sport
3 weeks ago

Mngqithi heaped praise on new arrival Neo Maema, who dished out yet another player of the match performance in the 4-0 win over Gallants.

The Sundowns co-coach said the 25-year-old Maema is head and shoulders above players who play in the same position as the former Bloemfontein Celtic attacking midfielder.

“We know what Neo is capable of but what is encouraging for us is when a young player like him presents himself as a player who has got a goal in him, who has got an assist, who improves his assists and that is what we want with offensive players.

“It is easy in SA to have an offensive player who does not take a shot at goal, who does not have an assist and can’t put in a cross but is highly respected.

“So a Neo Maema is a player with a goal, with a cross, with a dribble and with a pass and those are very important.”