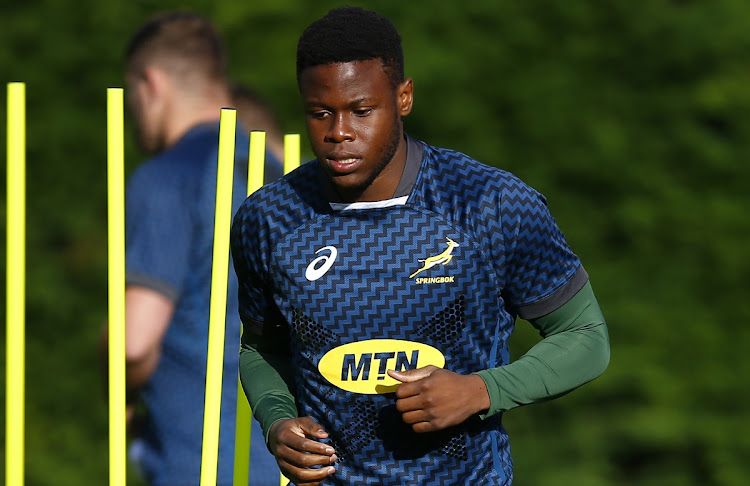 Former Springbok Gcobani Bobo has advised young SA star Aphelele Fassi to be patient and learn from the likes of the experienced Frans Steyn and Willie le Roux.

There was much debate after Fassi was not selected for the first end-of-the-year Test against Wales.

In the 23-16 win, Jacques Nienaber opted for Jesse Kriel at wing and Damian Willemse at fullback while Man of the Match Steyn provided cover from the bench.

In the Bok set-up, Fassi finds himself in a predicament he has never been faced with in his career.

From his time as a schoolboy star at Dale College to the Sharks, he has never had to be at the back of the queue for a starting berth.

However, he now finds himself the fourth option in his preferred fullback position behind Le Roux, Steyn and Willemse.

Fassi’s two caps have come from him starting at wing, where he has been impressive.

He got a try in his debut against Georgia in Pretoria and then followed that up with a commanding performance against Argentina in Gqeberha.

Ahead of the outgoing tour, Fassi was tipped by many to get a run in the first Test against Wales.

But that was not the case and he has also missed out on selection for the second Test against Scotland in Edinburgh on Saturday.

Bok captain Kolisi: 'It has been a year with ups and downs'

Springbok captain Siya Kolisi has stopped well short of hanging the success or failure of their international season on what transpires on their ...
Sport
3 weeks ago

As he goes about establishing his career, SuperSport commentator Bobo, who also hails from Qonce, has urged Fassi to work on his skill sets and feed off the knowledge of the old heads to make the most of his situation in the team.

“So the biggest challenge about being in the spot he is in is how long does he want to stay in the bus, and that comes down to his attitude — staying positive, and making sure he impresses in training and improves,” Bobo said.

“The position he’s in; the fact he’s been identified and is part of the system and backed.

“He’s been given a Test against Georgia and was outstanding, and we saw how natural he was against Argentina.

“While you’re not getting picked it’s the best chance for you to get better; by the time they give you a chance you cement your place.

“Understand the system and the people you’re playing with — it’s just not about the rugby on the field, but the people outside the field.

“How does the environment give you a chance to be better?

“How do you exploit the environment to give you a chance to get better?

“And that goes a long way for your career, not just for now or 2023, but further down,” Bobo said.

Boks are fussy about experience

Aphelele Fassi's absence from the Springbok team that doesn't contain Willie le Roux or Sbu Nkosi has left many perplexed.
Sport
4 weeks ago

There are other players who are on the fringes and also awaiting their turn to play.

Bobo explained why it had been difficult for the Springboks’ management to blood in new players on the northern hemisphere tour.

“We’re in a debacle of the fact that we missed out on 18 months [of rugby] — in that 18 months a lot could have been sussed out in terms of growing the squad and giving players a chance.

“So to stabilise the squad you have to go to the tried and tested, and then you add as you feel fit,” Bobo said.