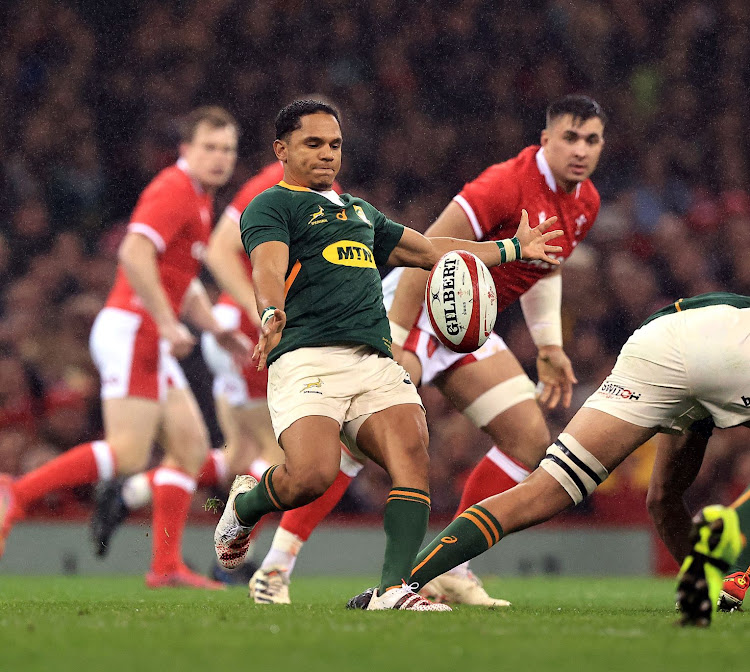 Though live wire Scottish flyhalf Finn Russell has a big bag of tricks at his disposal, the Springboks will not fall into the trap of putting all their focus on one player, scrumhalf Herschel Jantjies says.

Russell and scrumhalf Ali Price will be major threats for the Boks when they face a confident Scottish side in the Autumn Nations Series at Murrayfield on Saturday (kickoff 3pm SA time).

Bok coach Jacques Nienaber made two rotational switches and one injury enforced change to the side that defeated Wales 23-18 in Cardiff last week.

Franco Mostert comes in at lock and Elton Jantjies earns a run at flyhalf, with Lood de Jager and Handré Pollard moving to the replacements bench.

Springbok coach Jacques Nienaber is bracing himself for another arm wrestle when his team meet Scotland at Murrayfield on Saturday.
Sport
3 weeks ago

Asked how the Boks were planning to deal with the double threat posed by Russell and Price, Jantjies said: They are good players, and they were in the British and Irish Lions team that toured SA.

“They bring a specific skill set to the game.

“A guy like Finn Russell has a big bag of tricks, but to focus on one player will not help Elton or myself.

“The main and important thing to be aligned and to understand one another on the field, and to execute the plan.

“When the opportunity is available, it is up to us to spot it and take it.

“Ultimately it is the guys who spot opportunities and grab them who will give their team the best result.”

There was much debate after Fassi was not selected for the first end of the year Test against Wales.
Sport
3 weeks ago

Though the Boks beat Wales 23-18, Jantjies believes the men in green and gold can be sharper this weekend.

“Last week [in Cardiff] it was really tough with the conditions,” he said.

“Hopefully this week it will be a bit better, but it is still going to be cold.

“I think for us as a team it will be about taking the opportunity that presents itself, and making sure we are sharp and do not leave anything out there.

“Last week we left a few points and opportunities out there that we did not take.”

Jantjies says strong competition to wear the No 9 jersey was creating a healthy team environment.

“The competition at 9, like has been mentioned before, is healthy,” he said.

“There is competition within the whole squad and not just at scrumhalf.

“Maybe it’s something for the coaches that they have to argue about, but I think for the players it is a good thing because it keeps everyone on their toes.

“That can only bring the best out of the team.

“A guy like Faf [De Klerk]) has been helping me a lot, and Cobus [Reinach].

“I think someone like Grant Williams, who came in, is learning a lot from Cobus and hopefully from me who has played a few Test matches.

“Hopefully in the future we can see some of Grant as well and we can make that competition even stronger.”

The evergreen 34-year-old behemoth earned the man of the match award thanks to an inspirational display after he came on off the bench following an ...
Sport
3 weeks ago

Jantjies says he has a strong relationship with his namesake Elton, but he was not fussy about who he played alongside for the Boks.

“Whether I am playing with Handré Pollard or Elton at flyhalf, it does not matter who is at No 10 with me.

“I know that guy is aligned with what we want tor achieve as a team and we must execute that plan.

“Elton and I have good relationship off the field.

“Obviously it is a long time since we played together; I think the last time we started was against Namibia at the World Cup.

“That changes nothing and we are focused on executing the plan this weekend, and to play a good game.

“It helps with the communications skills and the build-up to the game, and where we can help one another.

About the surname they share, he said: “We joke about it, but we are not family.”